“The delivery of our first flagship marks a new era in Switzerland’s aviation history,” said Harry Hohmeister, CEO of SWISS. “As of today, our customers will enjoy a new dimension of air travel experience.”

The 777-300ER is the new flagship of SWISS’ long-haul fleet and is configured with 340 seats, eight in First Class, 62 in Business Class and 270 in Economy, with wireless internet connectivity throughout. SWISS’ 777-300ER will feature a totally redesigned cabin interior to enhance passenger comfort and will be initially deployed on the airline’s service between Zurich-New York JFK. 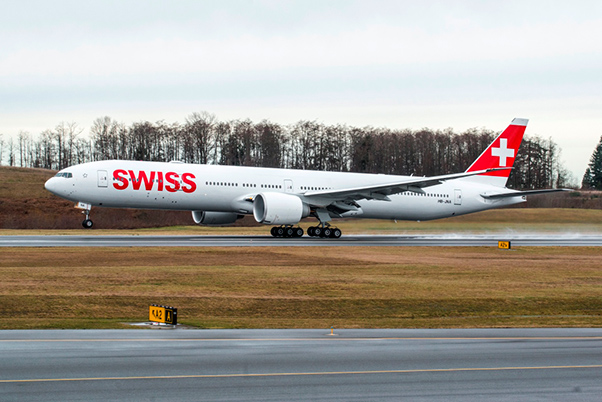 “We are honored that a carrier as prestigious as SWISS is now our newest Boeing 777 operator,” said Boeing Commercial Airplanes President and CEO Ray Conner. “The 777-300ER will provide SWISS’ network with greatly improved efficiencies and it’s a great source of pride for everyone at Boeing that the carrier will utilize this outstanding airplane as its flagship.”

The 777-300ER is one of the most fuel and cost-efficient airplanes in its class and is the most reliable twin-aisle aircraft in the world with an on-time departure rate of 99.5 percent. It also has the highest cargo capability of any passenger airplane in service. In addition to this delivery, SWISS has eight unfilled 777-300ERs on order from Boeing.

SWISS is part of the Lufthansa Group, serving 104 destinations in 48 countries from the Swiss cities of Zurich and Geneva, carrying more than 16 million passengers a year with a fleet of 92 airplanes.