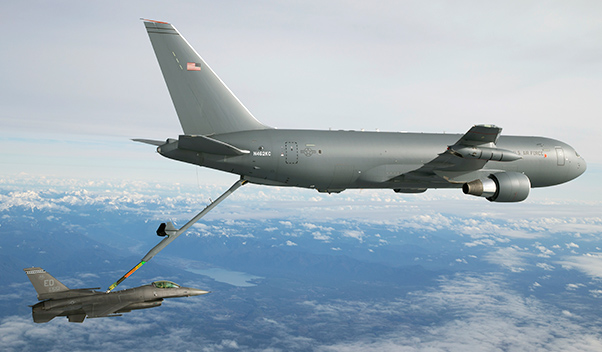 The KC-46 Tanker Program reached a major milestone Jan. 24, when it successfully demonstrated its first-ever aerial refueling contact and fuel transfer with an F-16C from Edwards Air Force Base.

The KC-46 Tanker Program reached a major milestone Jan. 24, when it successfully demonstrated its first-ever aerial refueling contact and fuel transfer with an F-16C from Edwards Air Force Base
.
The flight was the first in a block of testing out of Boeing Field in Seattle, Wash., using the boom system.

The Pegasus passed 1,600 pounds of fuel to an F-16 piloted by Lt. Col. Daniel Alix, 416st Flight Test Squadron, who characterized the mission as a complete success.

The KC-46A is currently scheduled to arrive at Edwards AFB in early 2017 to continue aerial refueling certifications and simulator data collection.  In the meantime, 412th Test Wing personnel and assets have been hard at work in Washington. An instrumented C-17 Globemaster III from Edwards is also one of the six total aircraft required to receive fuel in flight in support of the KC-46 Program’s upcoming Milestone (MS) C Low Rate Initial Production decision.

The test was a joint effort between Boeing and Edwards AFB personnel with a 412th TW pilot in the cockpit of the instrumented F-16C.  Inside the KC-46A, along with the Boeing Test and Evaluation team, were 418th Flight Test Squadron pilots, boom operators and flight test engineers, as well as discipline engineers from the 418th FLTS. An additional Edwards AFB F-16D served as a chase plane for safety and test support.

This testing follows extensive ground testing at Boeing’s production facility in Everett, Washington, last December, and legacy tanker ground tests at Edwards last September.  Both the KC-135 and KC-10 were used to baseline the KC-46A aerial refueling system’s performance under nominal and worst-case conditions. Boom nozzle fit checks for both the F-16 and C-17 receptacles were also conducted prior to this flight.

“In flight, boom operators from the 412th TW and Boeing conducted flutter and free-air stability testing, as well as handling qualities evaluations without a receiver present as build-up to first contact,” said KC-46 test pilot Lt. Col. Daryl Corneille.
Yesterday, similar evaluations and tracking exercises were conducted with the F-16C behind the KC-46A. Once the results of the evaluation were deemed satisfactory to the test team, the pilot was cleared to make contact in flight.

Like any test program, the KC-46A did not fly without the team overcoming a few challenges.  According to Corneille, there was a significant amount of coordination that had to take place.

As such, the 412th TW, Boeing, and the FAA had to combine their efforts to allow the USAF aircrews to participate in flight onboard the KC-46A and for the USAF receivers to conduct aerial refueling flight test with the KC-46A.

The new KC-46 comes with several big improvements. For instance, the new tanker uses a remote vision system to operate the boom.  In a current tanker, the boom operator executes refueling by viewing the receiver aircraft through a large sighting window in the aft of the aircraft. Instead, the KC-46 boom operator executes refueling while stationed just behind the flight deck in front using a remote camera system to view a 3-D image of the boom and receiver. The system is also equipped with panoramic cameras offering a 185-degree horizontal field of view behind the aircraft, which is especially useful for probe and drogue refuelings.

According to Corneille, the fuel system is also significantly improved from legacy systems.

“Fuel management during aerial refueling is highly automated and the crew does not have to manually maintain aircraft center of gravity or manage fuel offload rate during fuel transfer,” said Corneille.

Once the current block of testing is complete to support the MS C decision, the 412th TW will produce a report to send to the KC-46 Program Office.

The KC-46A Pegasus is intended to replace the Air Force’s aging tanker fleet, which has been refueling aircraft for more than 50 years. With more refueling capacity and enhanced capabilities, improved efficiency and increased capabilities for cargo and aeromedical evacuation, the KC-46A will provide aerial refueling support to the Air Force, Navy, and Marine Corps, as well as allied nation coalition aircraft.

The 412th TW is the lead developmental test organization for the KC-46 Tanker Program.