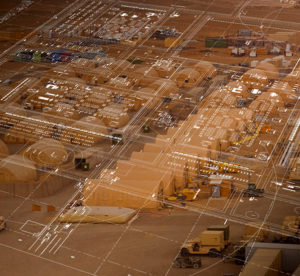 Product Director Contingency Base Infrastructure would like to help make the base camp planning processes, requisite materiel and long-term sustainment more predictable.

As a former Army officer, Dave Roy knows that commanders seek to upgrade base camps as time passes.

“We’re taught, it is ingrained in us,” Roy said. “If you’re going to be in any one place for any amount of time, you improve your position.”

However, how those base camps in places such as Afghanistan and Iraq have expanded and shrunk differs greatly. Roy, a team leader at the Natick Soldier Systems Center with the Warren, Michigan-based Product Director Contingency Base Infrastructure, or CBI, would like to help make the base camp planning processes, requisite materiel and long-term sustainment more predictable.

“The idea is to provide the Army with standardized base camp capabilities that are flexible enough to allow the maneuver commander, or the combatant commander, the freedom to develop his basing strategy in that area of operation,” Roy said. “By standardizing the capabilities, it would make it more cost-effective for that commander.

“We’re providing designs and materiel definitions for a commander to utilize existing equipment to emplace a base camp.”

As Roy pointed out, military operations go through six phases – zero through five.

“The Army does an absolutely superb job of getting us from zero through phase three,” said Roy, adding that major combat operations are over in phases four and five.

Once stability operations get underway in a host nation, the basing solutions for a once mobile force might not be adequate for a more static posture.

“How do we adapt equipment that has been designed to support an Army on the move into a stationary base camp an Army uses to sustain and project combat power,” Roy asked. “A base camp is essentially a village. How do I sustain that?”

According to Roy, CBI wants to do that by using materiel already in the Army inventory and anticipating what science and technology could produce in the coming years.

“Our vision is to be the DOD-lead agency providing innovative, robust and efficient contingency basing solutions that meet any requirement for any location for any mission,” Roy said. “And that’s far-reaching.”

“As we’ve seen in 12 years, 14 years – Iraq and Afghanistan – that base camp will grow and shrink over time,” Roy said. “So that scalability and modularity goes both ways.”

Commanders will be able to add expansion or enhancement packages to their base camps to accommodate their missions, local climates, and growth without degrading quality of life for Soldiers. For example, a Stryker brigade combat team in Europe would have different requirements than an infantry unit in the Middle East.

Roy said that CBI will provide a resource that was non-existent in the past.

“We can help those senior leaders… answer those complex questions,” Roy said. “What am I getting, how much it’s going to cost, what are the resource consumption forecasts for these base camps, and when it’s going to show up.”

It all means more efficiency, which translates into cost savings in an era of increased fiscal constraints.