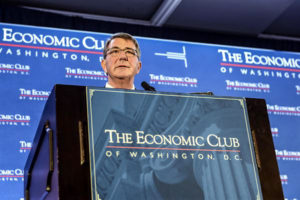 Defense Secretary Ash Carter previews the 2017 defense budget during a breakfast event at the Economic Club in Washington, D.C., Feb. 2, 2016. Carter discussed the evolving challenges that drive the department’s planning, including the ongoing fight against terrorism.

Speaking at the Economic Club of Washington, D.C., Carter said the $582.7 billion defense budget to be released next week as part of the administration’s fiscal year 2017 budget request marks a major inflection point for the department.

“In this budget we’re taking the long view,” the secretary said. “We have to. Even as we fight today’s fights, we must also be prepared for the fights that might come 10, 20 or 30 years down the road.”

Five evolving challenges drive the department’s planning, he said, including Russian aggression in Europe, the rise of China in the Asia-Pacific region, North Korea, Iran, and the ongoing fight against terrorism, especially the Islamic State of Iraq and the Levant, or ISIL.

Five challenges
The department must and will address all five challenges and across all domains, Carter said.

“Not just the usual air, land and sea, but also particularly in the areas of cyber, space and electronic warfare, where our reliance on technology has given us great strengths but also led to vulnerabilities that adversaries are eager to exploit,” he added.

Highlighting new investments in the budget to deal with the accelerated military campaign against ISIL, Carter said the department is requesting $7.5 billion, 50 percent more than in 2016.

Of that, he said $1.8 billion will go to buy more than 45,000 GPS-guided smart bombs and laser-guided rockets. The budget request also defers the A-10 final retirement until 2022, replacing it with F-35 Joint Strike Fighters squadron by squadron.

Strategic capabilities
To support the European Reassurance Initiative, the Pentagon is requesting $3.4 billion in 2017, quadrupling the fiscal 2016 amount, the secretary said, to fund more rotational U.S. forces in Europe, more training and exercising with allies, and more prepositioned fighting gear and supporting infrastructure.

Investments in new technologies include projects being developed by the DOD Strategic Capabilities Office, or SCO, which Carter created in 2012 when he was deputy defense secretary, “to reimagine existing DOD, intelligence community and commercial systems by giving them new roles and game-changing capabilities,” he said.

To drive such innovation forward, the 2017 budget request for research and development accounts is $71.4 billion.

Carter said SCO efforts include projects involving advanced navigation, swarming autonomous vehicles for use in different ways and domains, self-driving networked boats, gun-based missile defense, and an arsenal plane that turns one of the department’s older planes into a flying launch pad for a range of conventional payloads.

Investing in innovation
The budget request also drives smart and essential technological innovation, the secretary added, noting that one area is undersea capabilities for an $8.1 billion investment in 2017 and more than $40 billion over the next five years, Carter said, “to give us the most lethal undersea and anti-submarine force in the world.”

The Pentagon also is investing more in cyber, he said, requesting $7 billion in 2017 and nearly $35 billion over the next five years.
“Among other things,” Carter said, “this will help further improve DOD’s network defenses, which is critical, build more training ranges for our cyber warriors, and develop cyber tools and infrastructure needed to provide offensive cyber options.”

Cyber, space, people
The Pentagon’s investment in space last year added more than $5 billion in new investments, and this year the department will enhance its ability to identify, attribute and negate all threatening actions in space, the secretary said.

“With so many commercial space endeavors, he added, “we want this domain to be just like the oceans and the Internet: free and safe for all.”

Carter said the Pentagon also is investing to build the force of the future, highlighting opening all remaining combat positions to women and strengthening support to military families to improve their quality of life.