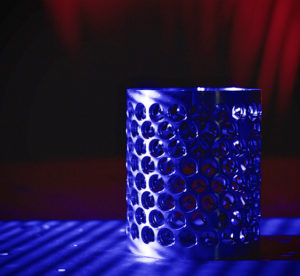 Structured blue light scanning uses a projector to cast blue with black lines across a surface. A camera on each side of the projector measures the lines as they curve along the surface. Each measurement scan can capture up to 8 million measurements within a matter of seconds. Multiple images can be taken while overlapping one scan to the other to cover the entire item.

How does one get a three dimensional measurement of a helicopter quickly and accurately? At the U.S. Army Aviation and Missile Research, Development and Engineering Center, 3-D scanning systems are used to recreate high-quality models of objects.

As one of six U.S. Army Research, Development, and Engineering Command, or AMRDEC, centers, the Weapons Development and Integration, or WDI, Directorate Metrology Team incorporates 3-D scanning systems to rapidly capture the shapes of objects for reverse engineering and quality control.

“Optical metrology is an important, emergent technology thrust area for AMRDEC,” said James Lackey, AMRDEC director. “As the science of measurement, it represents incredible application value in terms of being able to provide highly-accurate dimensional data sets and [the ability to] translate them through advanced analytic techniques to produce three dimensional electronic product data files.”

Originally, data measurements were obtained through the use of physical measurements with tools like calipers. Inspection tools evolved into coordinated measurement machines to accurately measure individual points of a surface. This sparse sampling often missed important variations in surfaces.

Hand-held laser scanners increased the number of points measured but had problems capturing edge detail and scaling across larger objects such as aircraft while maintaining high fidelity.

“We had to be innovative and find a better way to solve measurement problems,” said Tyler Sherrod, AMRDEC mechanical engineer. “This is important because if a program needs a computer aided design [CAD] model of their helicopter, AMRDEC can use optical metrology to scan and recreate [the] CAD of the helicopter.”

“When you capture a scanned item and match it with its original design, a color comparison is provided and you are able to determine what is and is not acceptable,” said Benjamin Thomason, AMRDEC WDI metrology team lead. “If there is a problem getting a part to the warfighter in theater because it is no longer manufactured, we can 3-D scan the part, reverse engineer a CAD package, manufacture the part, and deliver it to the men and women on the ground.”

“This is exactly the sort of disruptive application of innovative technologies that we need to champion,” said Lt. Col John Schmitt, AMRDEC military deputy director. “This team is tackling challenging problems across the lifecycle in very non-traditional ways and upsetting the status quo. This sort of work is not only paramount to our critical defense missions, but provides an example of exciting applications of technology that will attract and retain our future workforce.”

The team will use their optical metrology systems to 3-D scan a 41-foot long Coast Guard utility boat at AMRDEC’s prototype integration facility in mid-February.

“We have scanned large and small objects including helicopters, vehicles, aircraft and spacecraft,” Hall said.

“It will take us about two weeks to scan and obtain the interior and exterior data of the boat. Once we are finished, we will have a full model of the boat including any defects that may not be noticeable to the natural eye,” Thomason said.

“Optical metrology can additionally shorten production cycles and realize greater cost efficiency,” Lackey said. “This comes about by building more accurate production-ready dimensions and tolerances as well as [the] ability to better define material need and thus lower scrap and rework which represents unnecessary sunk cost from a manufacturing perspective. Manufacturing technology is a key part of AMRDEC activity. In partnership with the other services, we will help lead the way on defining use of metrology for aviation and missile systems applications across DOD and industry.”

A collaborative agreement to work with NASA is in legal review.

“We like to collaborate with other industries and organizations. Collaboration is a key initiative within AMRDEC leadership,” Thomason said. “Working together and leveraging each other’s resources is prudent not only from a practicality of saving the taxpayer money but also enables valuable knowledge exchange. By sharing within AMRDEC and NASA to provide information and learn from each other, the Redstone metrology community is pushing forward to accelerate the development and implementation of this technology in creative and innovative ways.”