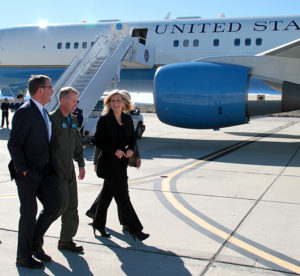 Secretary of Defense Ashton Carter visited Naval Air Warfare Center Weapons Division China Lake, Calif., on Feb. 2 for a tour and discussion about the innovative work going on at the command.

“This place is at the hub of a major strategic transition for the United States,” Carter said. “We are emphasizing our capabilities against high-end potential opponents. What you all are doing here is so important to our country’s security.”

“I had the great opportunity to meet with a number of folks today,” said Carter, who couldn’t talk specifics about everything he saw while at China Lake. “That’s because we like to have some surprises for our potential adversaries.”

“This gave us the opportunity to discuss how our government-industry partnerships have driven costs down in the AARGM program,” Corey said.

Carter also talked with NAWCWD chemists about the latest advancements in 3-D printing, and its use in energetics as a time and cost-saving measure.

“Although Secretary Carter’s time at China Lake was short, we were able to show him some of the innovative and potentially game-changing work that is going on at NAWCWD,” Corey said. “He got a glimpse of how our civilian-military workforce at NAWCWD, with its unique in-house expertise and access to cutting edge technology, will help us stay relevant and one step ahead of our adversaries.”
Before departing China Lake, SECDEF met with members of the China Lake workforce and thanked them for their hard work and dedication in support of the warfighter.

“Make sure your families know how much we appreciate what you are doing because you are right here, right now at the hinge of history for our Navy,” Carter said before handing out his personal coins to everyone in the audience. “Being SECDEF is fantastic because of you. It makes me so proud to describe the wonderful people who defend our country, and that includes the folks in uniform and our civilians. Thank you for what you are doing to make our country safer.”