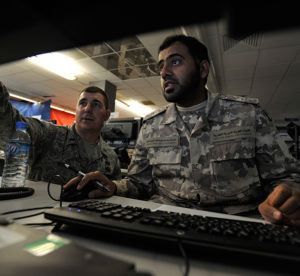 “This type of training is invaluable,” said Lt. Gen. Charles Q. Brown Jr., the commander of U.S. Air Forces Central Command and Combined Forces Air Component. “We have been able to improve our interoperability with our partners in the (Persian) Gulf region as well as increase the air and air defense capabilities within the coalition.”

The GCC LNO program, which is in its ninth cycle, was streamlined from 15 weeks to six and is significantly more operations focused than the previous cycles. The two-week Senior Operations Planner Program, running concurrently with the GCC LNO program, was executed for the first time during this cycle. This seminar-type training capitalized on the sharing of knowledge and experiences from Persian Gulf coalition members in order to best equip future combined air operations center liaison officers and planners. The exercise is the culmination of the new GCC LNO and senior planner programs. 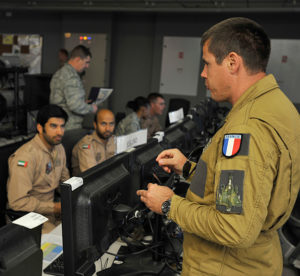 “This group of highly skilled and knowledgeable officers brought a wealth of experience to the table,” said 1st Lt. Joshua Skoglund, a LNO/senior planner program coordinator. “They demonstrated the highest levels of integration and cooperation to accomplish their learning objectives.”

During the course, the senior planners concentrated on strategic planning and campaign plan development and then worked with LNOs to produce a master air attack plan and briefings for the exercise and supervised the execution of that plan.

“It’s a great concept with both classes running simultaneously and in concert with each other; one feeding the other,” Skoglund said. “Without the sharing of knowledge and experiences from our gulf partners this concept would not have become a reality.”

Since this was the first iteration of the new program, Skoglund said student feedback and learning about each individual culture has been a great experience.

“It was great to be part of this unique opportunity to learn from and be immersed in our gulf partner’s culture,” Skoglund said. “I look forward to working with them in the future in an operational environment.”

The course director, French Air Force Lt. Col. Eric Konietzko, said the highlight of the course for him was to see the participants put the lessons into action.

“It was really good to see the students from different countries and their ability to communicate,” Konietzko said. “To see the participants create and deliver their briefs and execute their plans was, for me, the top of the course.”

Konietzko said this course will increase the readiness of the coalition to deal with any current and future contingencies by allowing countries to better integrate operations.