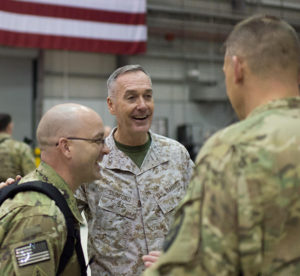 Talk about the United Service Organizations and people think it is some holding company. But mention USO, and all Americans know it is a way for them to connect with service members.

Retired Army Gen. George W. Casey Jr., the chairman of the USO Board of Governors and former Army chief of staff, estimated that the USO has served more than 35 million Americans over its history.

The USO marked its 75th anniversary Feb. 4 at a gala in Washington, D.C. Medal of Honor recipients, USO volunteers, active duty personnel, veterans, members of Congress, and stars of stage, screen and music gathered to mark a milestone for an organization founded as America geared up for World War II.

Dr. Jill Biden, wife of Vice President Joe Biden, called the group a family that stretches around the world. J.D. Crouch, the organization’s chief executive officer, thanked the celebrities for joining in the celebration and for entertaining American service members around the world as ambassadors from the American people. “You light up our service members’ lives,” he said, “and you remind Americans of the debt of gratitude that we all owe to those who serve.”

Founded at a dark time in history
The USO came into being during a dark time in history. The United States was not at war, but the rest of the world seemed to be. Hitler’s troops stood on the English Channel and launched nightly air raids against London. In the Pacific, Japan eyed the colonial possessions of France and the Netherlands – two of the countries Germany had conquered in its 1940 blitzkrieg.

In face of such threats, the United States instituted a military draft, calling hundreds of thousands of men to the colors, and Americans wanted to reach out to their young men. President Franklin D. Roosevelt asked charitable organizations to band together to provide morale and recreation services to service members.

Japan attacked the United States on Dec. 7, 1941, and America entered the war. The Army, Navy and Marine Corps grew, with more than 12 million men and women in uniform by 1945. And the USO grew as well; by the war’s end, about 1.5 million Americans had volunteered for the USO.

Actor-comedian Bob Hope – a man who would be virtually synonymous with the organization — held the first camp show in 1941, and for the next five decades, he was the face of the organization.

Changing as America has changed
The organization changed just as the American military changed, and it is continuing to change. And wherever the military went, the USO went, too. There were USO centers in Korea, Vietnam, Bosnia, Somalia, Kuwait, Iraq and Afghanistan.

The USO has grown to the extent that today, just a small portion of its budget goes to entertainment. But that aspect is still there.

First-hand look by Joint Chiefs Chairman
Marine Corps Gen. Joseph F. Dunford Jr., the chairman of the Joint Chiefs of Staff, led the annual USO Holiday Trip to Naval Air Station Sigonella, Italy; Camp Lemmonier, Djibouti; Naval Support Activity Manama, Bahrain; Bagram Airfield, Afghanistan; and Ramstein Air Base, Germany, in December. He told the crowd at the anniversary celebration that the trip opened his eyes on what the organization provides the men and women of the U.S. armed forces.

The general said he would talk to the troops after the show and ask how they liked it. “They’d say, ‘You know what, sir, for a few minutes, I forgot I was here. I felt like I was home.’” Dunford said. “That’s actually why President Roosevelt started the USO.”

But it is even more than that, the general said, and it goes to the heart of why the USO is important to America and its fighting forces. The country has asked a lot from its military since the attacks of 9/11, he noted, and the troops have performed magnificently. “I think it’s exceeded any of our expectations, and there’s a lot of reasons for that,” he said.

One of the reasons the young men and women who have deployed forward have performed so well, the chairman added, is that they “have gone forward knowing that they had the support of the American people.