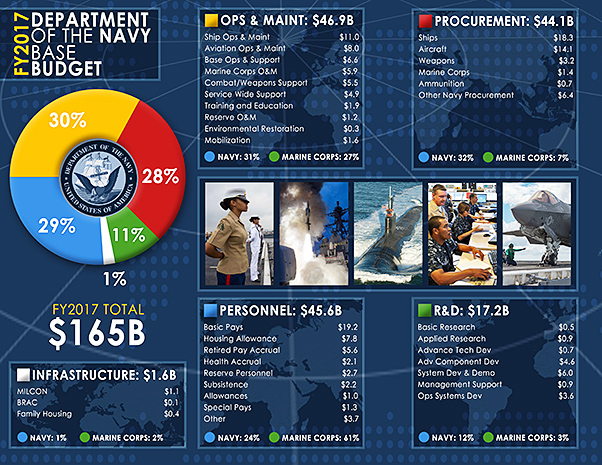 The Department of the Navy released its proposed $165 billion (Base and Overseas Contingency Operations) budget Feb. 9 for fiscal year 2017.

This budget is part of the $583 billion (Base and OCO) defense budget President Barack Obama submitted to Congress on the same day.

Deputy Assistant Secretary of the Navy for Budget Rear Adm. William Lescher briefed media at the Department of Defense budget press conference about the Navy and Marine Corps portion of the budget.

This year’s budget submission was guided by CNO Richardson’s Design for Maintaining Maritime Superiority, which reflects the character of the security environment and accounts for the forces at play in the maritime system, the force of the information system and the force of technology entering the environment. It makes key investments in people, platforms, installations, and research and development, so that the Department of the Navy can execute the Defense Strategy.

The Department of the Navy focuses on increasing readiness and support for personnel in the new budget, by adding billets for base security and officer manning, providing a 1.6 percent pay raise, investing in Sailor 2025, and improving how the Navy matches sailors with jobs in the fleet to ensure the Navy attracts, trains and retains the very best talent America has to offer.

The Department of the Navy fiscal 2017 budget includes a $45 billion (Base and OCO) procurement budget focused on improving high end capability across all warfare areas.

Additionally, the 2017 budget fully funds the Ohio Class Replacement SSBN and maintains the Ohio Replacement Program as the Navy’s top priority in strengthening naval power at and from the sea. The budget funds 94 aircraft in fiscal 2017. F-35 FYDP production increases by 13 aircraft from the PB16 acquisition plan, accelerating the 5th Generation Fighter transition. In combination with the five additional F-18s in fiscal 2016, two in fiscal 2017, and 14 in fiscal 2018, these investments help to mitigate the department’s strike fighter shortage. The P-8 Poseidon profile reflects the plan to accelerate procurement of one additional P-8 in 2016, and maintains the production plan to complete the buy in fiscal 2019.

Reflecting the continued need to expand key capabilities to meet dynamic changes in the security environment of today, this year’s submission includes $17.3 billion for research and development supporting the Navy-Marine Corps team of the future through technological advantages designed to counter adversaries in all environments and across all spectrums.

The Department of the Navy budget includes a $55 billion (Base and OCO) request for operations and maintenance, emphasizing the balance of today’s needs with future priorities when operating forward in an ever-evolving security environment.