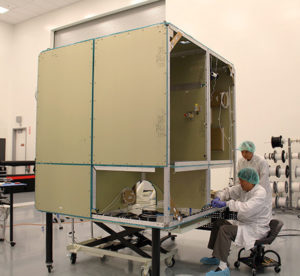 Reaching this point in the program is a significant milestone for both our Air Force and NASA Ames Research Center (ARC) Customers and Millennium Space. “We’re proud of the work done to date and look forward to completing the bus and integrating the OPIR sensor,” shared Millennium’s President Vince Deno.  “With the hardware, software and interface verification behind us, we can turn our focus to final bus integration and test. WFOV is another great example of how the Government is capitalizing on Millennium’s ability to quickly deliver National Security Space solutions affordably and effectively.”

Millennium Space System’s Program Manager for WFOV Testbed, Dr. Ryan Lawrence, echoes Mr. Deno’s enthusiasm, “This has been a team effort with our Air Force SMC and NASA Ames Customers, the Aerospace Corporation, and our Millennium development crew. I’m proud of our team’s achievement in getting to this point – but we’re keeping our eyes on the prize – and that means successfully delivering and operating the spacecraft on orbit, on time, and on budget.”

“The team has made outstanding progress on the WFOV spacecraft bus development,” said Lt. Col. Michelle Villavaso, SMC’s program manager overseeing the WFOV Testbed contractor team. “This is a critical milestone for the Air Force’s WFOV program and Space Modernization efforts to enhance the capabilities of the current Space Based Infrared System enterprise.”

Bruce Yost, NASA Ames’ Contracting Officer’s Representative for Millennium’s WFOV effort, added “As the Executing Agent for the USAF WFOV Testbed effort, our approach to the execution of the NASA contract with Millennium Space Systems has been focused on the rapid deployment of a high quality spacecraft bus at a very competitive cost.”

The Space and Missile Center is based at Los Angeles Air Force Base, Calif.