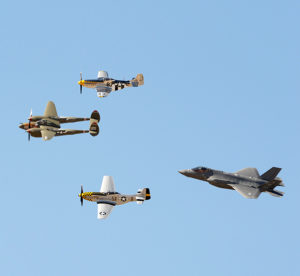 Aviation and F-35A Lightning II fanatics have something special to look forward to this 2016 air show season.

“Being a part of these heritage flights allows the world to learn more about the F-35 and at the same time see just how far airpower has come over the years,” said Brig. Gen. Scott Pleus, the 56th Fighter Wing commander. “The F-35 will be the backbone of the Air Force fighter fleet and represent the future for the U.S., our partners and allies. This will be a great opportunity for everyone to see how amazing the F-35 is.”
The F-35 heritage flight team includes one pilot and 10 maintainers, all selected from the 61st Fighter Squadron at Luke AFB.

“My team and I are very excited for this year,” said Maj. William Andreotta, an F-35 heritage flight team pilot. “We’re so honored to be the first ever F-35 heritage flight team. We are really laying the foundation for years to come. We know it’s going to be a great season and we’re ecstatic about talking with different communities and showcasing the F-35.”

The team practiced their entire routine at the conference. The maintainers were able to show off their coordinated take-off and landing procedures while Andreotta practiced and perfected flying in formation with heritage aircraft. In the backseat of one of those heritage aircraft held a very interested passenger.

“I got to jump into the back of a P-51 Mustang and view an F-35 off the wing,” said Lt. Gen. Darryl Roberson, Air Education and Training Command commander. “Our F-35 team is ready to hit the road for the show season. It was awesome to see it up close and personal. I feel very confident in what the Luke team is doing here, and I’m excited for them to show this aircraft off to the world.”

From the opposite perspective, Andreotta experienced flying in formation with heritage aircraft for the first time during the conference.
“It’s surreal to be flying the latest and greatest fighter aircraft in the world and look over to see fighter aircraft from World War II, Vietnam and Korea right next to you that were at one point the greatest fighters of their generation,” Andreotta said. “It’s like passing the torch in the lineage.”

Heritage flights are just as incredible on the ground as they are from the air.

“Viewers are going to get to see a remarkable show,” said Master Sgt. Ed DeLeon, F-35 heritage flight team superintendent. “They will see America’s newest technology and compare the advances first hand. We’re going to showcase the past, present and future of the Air Force.”
The team will travel to 16 air shows around the U.S. and abroad.

“We’re very excited about demonstrating this capability to the world,” Air Force Chief of Staff Gen. Mark A. Welsh III said in January when the service first announced the F-35’s participation in the Royal International Air Tattoo this summer at Royal Air Force Fairford, England. “The F-35 represents a new way of thinking about data integration, weapons and tactics. We’re thrilled to highlight the program and the amazing Airmen who support this cutting-edge fighter.”

The F-35 heritage flight team gets to officially start their historic first season at home.

“Our first show is at Luke,” DeLeon said. “It’s nice to be able to start at home and showcase what we’re all about in front of our friends and families. After that, I’m so excited to get on the road and show the world what we’re all about.”
Luke AFB will present the “75 Years of Airpower” air show to the Arizona community April 2-3.