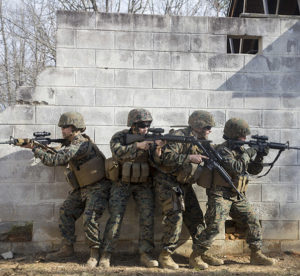 Female Marines and a male sailor, all assigned to the 22nd Marine Expeditionary Unit, prepare to enter a building during an urban operations training exercise with a female engagement team at Fort Pickett, Va., Feb. 21, 2016. Defense Secretary Ash Carter announced today that the services are authorized to begin integrating women into all military occupations and specialties.

“After “exceptional work,” the U.S. military is authorized to begin integrating women across all occupations and specialties “right away,” according to a Defense Department statement released today.

Managing change ‘the right way’
In the statement, Carter said the department must handle the change “the right way, because the combat effectiveness of the world’s finest fighting force is paramount.”

The review was the culmination of years of studies and reports going back to 2011, when then-Defense Secretary Leon E. Panetta ordered an examination of all laws and policies governing the assignment of women in the armed forces.

Not ‘the way we’ve always done’ things
Carter wrote a Medium post published today detailing his views on the implementation plans. It is available at https://medium.com/@SecDef/moving-out-on-women-in-service-b3f3c0d12bf2#.n8zbvzjr1.

In the post, the secretary gave some behind-the-scenes details on what the studies and reviews turned up.

“We found over the last few years that in some cases we were doing things because that’s the way we’ve always done them,” Carter wrote. For example, he said, the 35-pound weight carried by marchers in their rucksacks during the Army’s Expert Infantry Badge qualification was based on a World War II-era airborne study.

“It was the minimum weight required to prevent the rucksack from getting tangled in a jumper’s static line, and had nothing to do with the equipment required for paratroopers to fight with once they landed — let alone the modern equipment that infantry soldiers need to carry today,” Carter noted.

The study and work that has gone into opening all military jobs to women “drove us to take a closer look at our training, too,” the secretary wrote.

Equal opportunity, merit-based advancement
Carter wrote that the department’s performance standards are now informed by real-world operational requirements and the experiences gained in Iraq and Afghanistan. “As a result, our military will be even better at finding and training not only the most-qualified women, but also the most-qualified men, for all military specialties,” he wrote.

Carter has said throughout his tenure that the integration process will mean equal opportunity for, not equal participation by, women service members.

“ Integration provides equal opportunity for men and women who can perform the tasks required; it does not guarantee women will be promoted at any specific number or at any set rate, as adherence to a merit-based system must continue to be paramount,” the secretary wrote.

Carter noted, “We have to remember that it takes decades to grow a general or flag officer, so it will take time to see these results.”