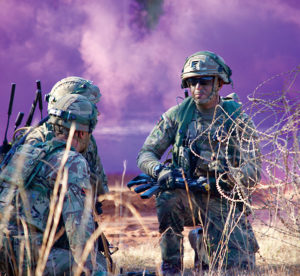 Sgt. Phillip Cree, 3rd Battalion, The Rifles (British Army), provides last minute instructions to his Soldiers before they initiate an assault during AEWE 2016 on Fort Benning.

The British 3rd Battalion, The Rifles of the United Kingdom, and Soldiers of A Company, 1st Battalion, 29th Infantry Regiment (Experimentation Force), partnered with the Maneuver Battle Lab to execute the Army Expeditionary Warrior Experiment, experimenting with a myriad of different technologies and how they can be applied to future war fighting tactics.

The purpose of AEWE is to examine prototypes and concepts that make small units more effective for future modernization, to get Soldier feedback early in the modernization process and to provide an opportunity for industry and the Army’s science and technology community to help the Army solve military problems, said Harry Lubin, chief of the experimentation branch at the Maneuver Battle Lab.

The significance of the British and U.S. troops working together was to see firsthand how each unit “fights the fight” and learn how to fight together, said Capt. David Sammy, EXFOR Company commander.

“I would say the similarities far outweighed the differences,” said Capt. Tom Marshall, 3 Rifles. “We continued to use some British tactics for the experiment, and it was a happy arrangement.”

Not only did the British troops have to learn the U.S. Army tactics, but had to adapt to being in the U.S.

“Capt. Marshall’s team showed up at the beginning of January and it has been a whirlwind for them ever since,” Lubin said. “So you’re adapting to all that, you’ve got new command relationships here … they have to learn all the technologies and become proficient in them, learn tactics in the U.S. and execute the experiment.

“Likewise, Captain Sammy has to integrate these guys into this training,” he added.

Staff Sgt. Ian Reid, Scout section leader, 316th Cavalry Brigade, discussed how the training is important to not just Fort Benning Soldiers, but to all Soldiers in the military.

“We see what we can put in the force for future Soldiers and it helps with their lethality and speed – everything that incorporates what every Soldier needs to be,” he said. “We are the bedrock to help them accomplish tasks to fight and destroy the enemy, and it all starts here with us.”

Marshall said he and his Soldiers were thankful for the experience and have helpful tactics to bring home. It was his first time visiting the U.S.
“From the British perspective, I just want to give a big thank you to everyone at Fort Benning for giving us such a warm welcome,” he said. “It made us feel really at home during our time here.”

Lubin said leadership is looking at the possibility of sending the EXFOR to the U.K. to have a similar experience using their technologies and tactics.