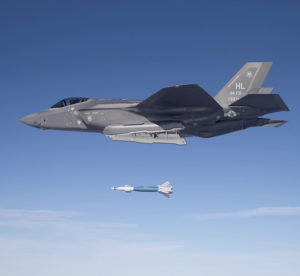 Agility and innovation are cornerstones of a new Air Force Materiel Command strategic plan that will deliver war-winning capabilities.

Those capabilities will propel the Air Force as a key element of the future national defense strategy known as the third offset.

The first offset came in in the 1950s when the United States looked to tactical nuclear weapons to deter, or offset, large, conventional forces in Western Europe. The second offset came in the 1970s when the Soviet Union achieved nuclear parity and the U.S. sought an advantage by turning to precision-guided weapons.

The third offset is the Defense Department strategy to leverage new technologies to offset advances made by adversaries in recent years. It will draw on technologies such as artificial intelligence, autonomous systems and human-machine networks. A battlespace of the year 2030 could see F-35 Lightning IIs or a next-generation aircraft linked by satellite networks, cyber bugs that infect and take down adversaries’ computers and swarms of attack drones converging on enemy targets.

AFMC, with its ability to deliver and support agile war-winning capabilities, is crucial to providing those technologies and connecting them across the Air Force’s three domains of air, space and cyberspace. The strategic plan with its four goals, supporting objectives and a list of external and internal commitments will be the command’s blueprint for success.

“Our Air Force is in high demand around the globe every minute of every day. While it remains the world’s greatest Air Force, it must become more agile to operate effectively in the dynamic, ever-changing worldwide environment today — and tomorrow,” said Gen. Ellen Pawlikowski, the AFMC commander. “The expertise in our centers and laboratories puts us in the perfect position to deliver third offset capabilities and this strategic plan is the bedrock of our road ahead.”

In the plan, the command’s mission statement is short and declarative: “deliver and support agile war-winning capabilities.”

The command’s vision is “delivering the world’s greatest air force… the most trusted and agile provider of innovative and cost-effective war-winning capabilities.” AFMC will constantly strive to attain the vision with a focus on meeting the warfighter’s needs.

The heart of the strategic plan is its four goals:
* Increase agility of AFMC support to the Air Force enterprise
* Bolster trust and confidence of those we serve by meeting our commitments
* Drive cost-effectiveness into the capabilities we provide
* Recruit, develop, and retain a diverse, high-performing, and resilient team

To ensure AFMC achieves its goals, its six centers and the headquarters staff developed 11 supporting objectives and 35 commitments that will be measured, tracked and assessed throughout 2016. The commitments will help deliver the requirements of AFMC’s warfighter “customers” across the Air Force as well as enable the command’s 80,000-member workforce to do its job better.

The commitments are extensive and diverse. They range from providing assessments of adversary cyber threats to achieving major acquisition milestones to “people” commitments like improved support to the families of deployed military members.

“These commitments are important to our success,” Pawlikowski said. “We will track them and ensure our people are accountable for their fulfillment. Without strong commitments, our strategic plan cannot succeed.”