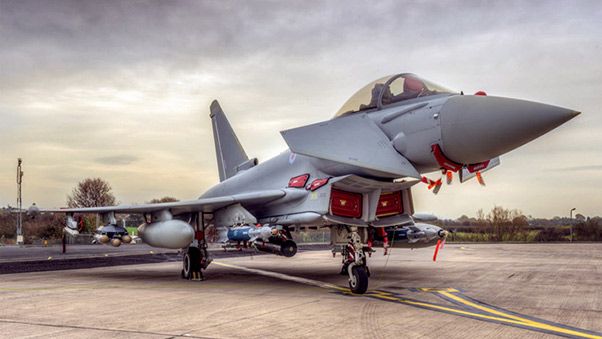 A series of successful ground rig trials with the air-to-surface MBDA Brimstone missile have been completed at the BAE Systems site in Warton, Lancashire, England.

The trials are part of the integration of the weapon on to the Eurofighter Typhoon combat jet.

A Brimstone weapon, consisting of a launcher loaded with three missiles, was connected to an avionics systems integration ground rig to test the communication between the launcher and software. The test was designed to ensure there was successful communication between the real weapon and the Typhoon aircraft. The activity follows successful completion of avionics design activity and the start of informal testing on the initial software in the rig.

“I am delighted that the ground rig trials have been successfully completed as we progress towards integrating these precision strike weapons onto our Typhoon aircraft. Brimstone offers laser-guided precision technology which will boost Typhoon’s capability and it is currently proving its worth in the fight against Daesh in Iraq and Syria,” said Philip Dunne, Minister for Defence Procurement. “These trials are another example of how the Ministry of Defence is investing its £178 billion over the next ten years in providing state of the art equipment for the Armed Forces.”

The trials, supported by MBDA, Eurofighter and the Eurofighter partner companies, are part of the test campaign for the Phase 3 Enhancements’ (P3E) package, which will introduce a low collateral precision strike air-to-surface capability to Typhoon through Brimstone.

“The ground rig trials are a key milestone in the integration of the Brimstone weapon on to Typhoon and we are delighted they have been successful,” said Paul Ascroft, BAE Systems’ technical manager for Phase 3 Enhancement package on the Typhoon. “While testing of the software will largely be performed using a Brimstone simulator, it is vital to ensure that there is successful communication between the weapon and the aircraft.”

The ongoing trials are running alongside a flight test campaign for the Phase 2 Enhancement (P2E) package, which brings a range of new and improved long range attack capabilities to the aircraft through MBDA’s Storm Shadow deep strike missile and MBDA Meteor Beyond Visual Range Air-to-Air missile.
These trials also form important maturity points for the U.K. Ministry of Defence’s Project CENTURION which will ensure that Typhoon is able to provide the continuous delivery of key combat air capabilities as Tornado moves towards its out of service date in 2019. Weapons integration activity for Typhoon as part of the Phase 2 Enhancement (P2E) package and initial testing of the Phase 3 Enhancement (P3E) package is scheduled to continue in 2016. Flight tests on the Brimstone missile are due to take place later this year.