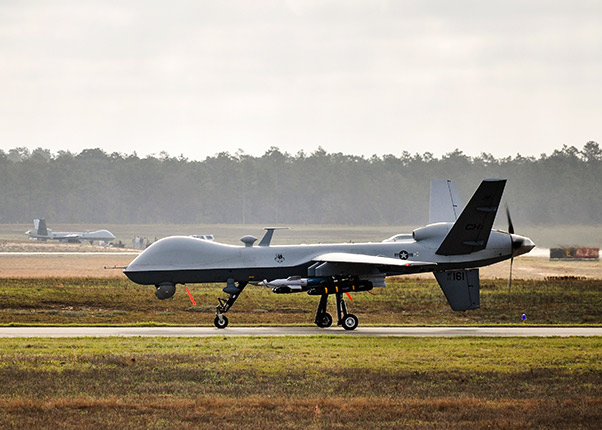 An MQ-9 Reaper prepares to take off from Duke Field, Fla., March 15. The Reapers operated at both Duke Field and Eglin Air Force Base, Fla., during the air-to-ground Weapon System Evaluation Program, Combat Hammer, from March 14-17.

In 2015, the 26th WPS became the first Reaper squadron to fire live weapons at maritime platforms and remains the only RPA squadron to do so. As maritime threats to the U.S. and its allies increase worldwide, it is vital for RPA teams to understand the strategic importance of firing over water.

“Air Force Reaper crews better know how to find, fix, track, target, engage, and assess maritime targets and do so in an integrated fashion,” said Lt. Col. Bryan Callahan, 26th WPS commander. “That’s why this WSEP is so important and why it’s critical that we hit all of our shots.”

Also known as Combat Hammer, this air-to-ground WSEP, hosted by the 86th Fighter Weapons Squadron, is designed to evaluate a weapon system from cradle-to-grave in a combat representative environment. For this WSEP, the Reaper’s participation in maritime operations will provide critical data to every combatant commander that has water in their area of responsibility. 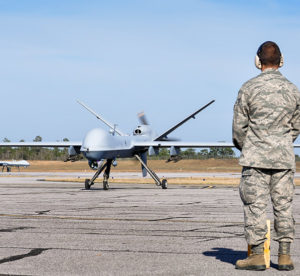 “Every time we fly in the U.S., it’s a strategic win because we show RPAs are not dangerous, we are able to fly safely in FAA airspace, and execute the mission,” Kollross said. “We have a very capable platform and weapon system.”

The WSEP is a prime example of integration in the battlespace. The Reapers participated with Air Force fighter jets, Navy helicopters, and other platforms, such as the U-28 and E-8.

“The integration of multiple aircraft gives units an opportunity to accomplish joint training that we don’t often get a chance to do until thrust into a combat scenario,” said Kollross.

He said this creates learning opportunities for all participating platforms such as who owns the airspace or how to hand off targets to a different aircraft. The ISR aircraft can even help identify and elevate the threat of each boat faster than fighter aircraft doing a low pass.
“In the end, having a nice compliment of aircraft make us the most effective,” said Kollross.

The integration doesn’t just occur in the air, but on the ground too.  Kollross said the coordination to operate the MQ-9 out of Duke Field involved more than 200 people and over 20 organizations to accomplish.

“As a whole, Combat Hammer has to do that on a much larger scale since we have three to four units here each WSEP…A lot of hours by a lot of people goes into making this happen and it couldn’t be done without a whole team effort,” he said.

For Reaper operations, the 26th WPS collaborated with several units to establish an operating location. The Reapers came from the 432nd Air Expeditionary Wing at Creech Air Force, Nev. The Texas Air National Guard in Houston provided the ground control station (the cockpit from which the pilots and sensor operators control the Reapers) and two Reaper teams. The Reaper Aircraft Maintenance Unit from Holloman AFB, N.M., sent equipment (ground data terminal antenna, etc.) and a maintenance crew who set up the infrastructure.

“In order to pull off a mission like this, it takes a lot of coordination to piecemeal it together,” said Senior Master Sgt. Seth, 49th Aircraft Maintenance Squadron superintendent. “The coordination, logistics, and communication among all the units is the biggest lesson learned. Just to have all of this equipment brought together and up and running within a week is a tremendous win.” 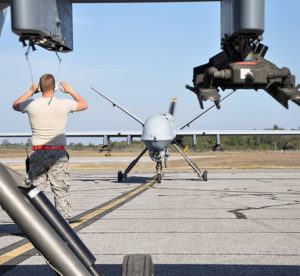 One of the most unique elements to this Combat Hammer is the opportunity to strike swarms of boats. In fact, the WSEP is the only place in the U.S. where swarm operations are conducted.

In these simultaneous missions against 30-35 boats at a time, the aircraft all rocket toward a vital U.S. asset, often breaking ranks to rejoin a few moments later.

“No one else in the DOD does these swarms to the level that we do,” said Kollross. “We try to make it as realistic as possible.  It takes a whole team, including community members who offer up their time and boats to make our military force stronger and prepared for any possible global threat.”

Overall the 26th WPS achieved 100 percent desired weapons effects against their maritime targets utilizing a combination of Hellfire missile variants. Participation in events like Combat Hammer will continue to play a key role in the 26th WPS’ ability to innovate its missions and procedures as well as produce highly skilled RPA crews for the Air Force and combatant commanders.

“The team effort required to secure participation from the MQ-9 community in Combat Hamer was immense,” said Lt. Col. Sean Neitzke, 86th FWS commander.  “It was a key step toward normalizing RPA training in the United States, and an important milestone for Combat Hammer supporting and evaluating the USAF’s full-spectrum combat capability.”

Editor’s note: The last names of maintenance, operations and intelligence personnel are not reported for security reasons.