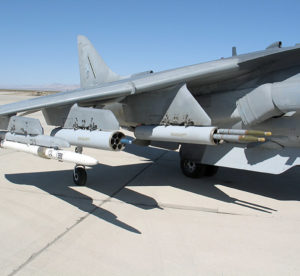 PMA-257 and the Direct and Time Sensitive Strike program office (PMA-242) worked together to define a two-phase program to quickly field the weapon variant.  The first phase expedited fielding of a limited AV-8B fixed-wing APKWS employment flight envelope capability.  This included the delivery of 80 guidance kits. The second phase will expand the fixed-wing APKWS employment envelope limits to the maximum extent possible for AV-8B.

“The intent of this requirement was to quickly provide the AV-8B with a low-cost, low-collateral damage, high-precision weapon in support of combat operations,” said Navy Capt. Al Mousseau, PMA-242 program manager. “This entire effort showcases what unity of effort among all government and industry stakeholders can accomplish to expediently deliver capability.”

APKWS, a product of BAE Systems, is the only DOD fully qualified 2.75-inch rocket that uses Semi-Active Laser guidance technology to strike targets in built-up and confined areas. The SAL is a laser seeker which allows the system to beam-ride reflected laser energy. The reflected laser energy is sourced by either airborne or ground-based laser designators providing positive target acquisition.