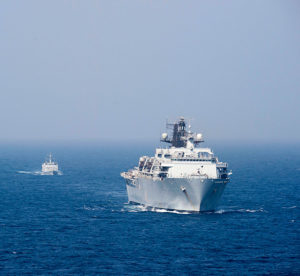 Ships of Commander, Task Group 521 transit in formation during the International Mine Countermeasures Exercise (IMCMEX). With a quarter of the world’s navies participating, including 6,500 Sailors from every region, IMCMEX is the largest international naval exercise promoting maritime security and the free-flow of trade through mine countermeasure operations, maritime security operations, and maritime infrastructure protection in the U.S. 5th Fleet area of responsibility and throughout the world.

The International Mine Countermeasures Exercise, the largest maritime exercise in the world, kicked off April 4, with international naval and civilian maritime forces from more than 30 nations spanning six continents training together across the Middle East.

The exercise is organized and led by U.S. Naval Forces Central Command, which leads U.S. Navy and afloat Marine Corps forces across the more than 2.5 million square miles of ocean in the U.S. Central Command area of responsibility.

“These participating nations are united by a common thread — the need to protect the free flow of commerce from a range of maritime threats including piracy, terrorism and mines,” said Vice Adm. Kevin Donegan, commander, U.S. Naval Forces Central Command. “This region provides a strong training opportunity for nations worldwide as three of the six major maritime chokepoints in the world are here: the Suez Canal, the Strait of Bab Al Mandeb and the Strait of Hormuz.

Nearly 20 percent of the world’s oil transits through the Strait of Hormuz every day. Imagine the impact on the global economy if suddenly that oil stops flowing because of restricted sea lanes. This region is clearly important to the whole world.” 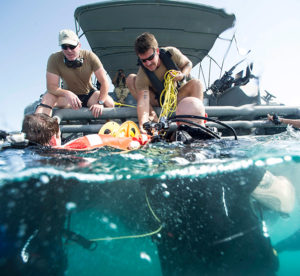 Explosive ordnance disposal technicians from Commander, Task Group 56.1 prepare to exit the water after completing a scuba dive off the coast of Bahrain during the International Mine Countermeasures Exercise (IMCMEX).

Through the course of this exercise, participants will train to execute a wide spectrum of defensive operations designed to protect international commerce and trade consisting of mine countermeasures, maritime security operations, and maritime infrastructure protection.

“This exercise is also a great opportunity for us to build proficiency and test the latest technology available for ensuring the global maritime commons stay open and secure,” said Donegan. “It also allows us to work with our partners to reinforce adherence to the international rules and accepted behavioral norms expected of professional mariners. If all nations followed these established practices the result would be a safe and stable maritime global commons with commerce flowing freely for the benefit of the global economy.”

IMCMEX begins with a symposium in Bahrain on Maritime Infrastructure Protection bringing together governments, militaries and industry to discuss how to best provide the necessary foundation of security that supports unrestricted access to the vital maritime infrastructure that is critical to regional and global economies. 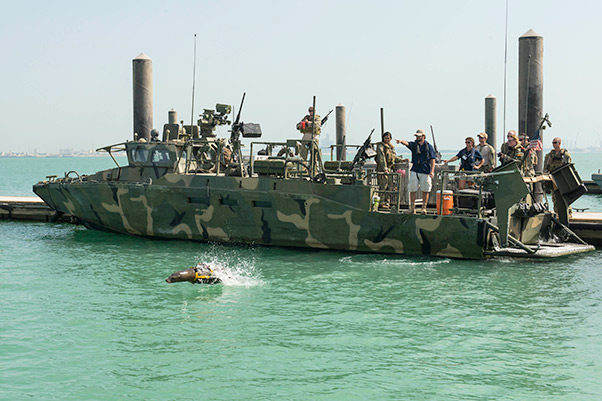 Marine mammal handlers from the Navy Marine Mammal Program direct Jabba, a California sea lion, to swim to the other side of the pier during the International Mine Countermeasures Exercise (IMCMEX).

“IMCMEX demonstrates the capability and co-operation of the international community and is not about any one nation or group,” said Commodore William Warrender, Royal Navy, Combined Maritime Forces deputy commander and leader of the exercise. “Our aim in IMCMEX 16 is to conduct exercises with our partner nations that allow us to continue to develop our interoperability and capability to ensure that we are ready to meet potential challenges now and in the future.”

The exercise runs through April 26.