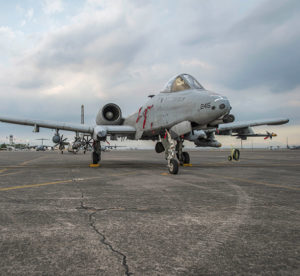 An A-10C Thunderbolt II, with the 51st Fighter Wing, Osan Air Base, South Korea, sits on the flightline of Clark Air Base, Philippines, April 16, 2016, after having flown missions in support of exercise Balikatan 16. The A-10Cs stayed to support a new air contingent in the Indo-Asia-Pacific region. The contingent provides opportunities to expand cooperation and interoperability with Philippine counterparts and reassure partners and allies of the United States’ commitment in the region.

Airmen assigned to the Pacific Air Forces stood up the first rotation of an air contingent at Clark Air Base, Philippines, April 16, following a joint announcement by Secretary of Defense Ash Carter and Philippine Defense Secretary Voltaire Gazmin in Manila that highlighted several initiatives aimed to enhance bilateral relations between the two nations.

“It’s a tremendous privilege having PACAF aircraft and Airmen constitute the air contingent’s first rotation that will lay the foundation for joint air patrols and promote stronger ties with our Philippine partners,” said Gen. Lori Robinson, the PACAF commander.

The aircraft and approximately 175 Airmen, including aircrew, maintainers, logistics and support personnel, remained in place to stand up the air contingent following their participation in exercise Balikatan, April 4-16. During the exercise, PACAF Airmen joined more than 7,000 personnel in the two countries’ premier bilateral event to conduct a variety of missions that enrich the bilateral partnership and commitment to the mutual defense treaty.

The remaining 30 air contingent Airmen will deploy from PACAF headquarters at Joint Base Pearl-Harbor-Hickam, Hawaii, as well as several other PACAF bases.

“By leveraging forces already operating at Clark AB, the standup of the air contingent required a minimal additional investment and will help to strengthen ties with our Philippine allies,” said Brig. Gen. Dirk Smith, the PACAF director of air and cyberspace operations. “Standing up this air contingent is just one way we are exercising our continued presence and demonstrating our commitment to partners and allies in the Indo-Asia-Pacific region.”

The A-10C is a multirole aircraft with the loiter capabilities and maneuverability at low air speeds and altitude necessary for conducting the air contingent’s air and maritime domain awareness and personnel recovery missions. The Pave Hawk is the Air Force’s premier personnel recovery platform, capable of conducting a diverse array of missions including civil search and rescue, medical evaluation, and humanitarian assistance and disaster recovery operations.

“Selecting the A-10C and HH-60Gs for this mission was strategically and economically the right decision as it allows us to use forces already deployed to the Philippines for exercise Balikatan,” Smith said. “Balikatan and the air contingent allow us to strengthen working relationships and become more interoperable with our Philippine partners and enable our aircrew and support personnel to become familiar with operating in this region.”

Following the completion of the first air contingent rotation, PACAF Airmen and aircraft are projected to redeploy to their assigned units in the U.S. Pacific Command area of operations, and will be replaced at a future date by aircraft and personnel from either PACAF or other military services. Follow-on rotations of additional aircraft and personnel will be determined in consultation with the Philippine government.

Along with standing up an air contingent, Carter announced several new bilateral alliance initiatives, including ongoing joint patrols with U.S. and Philippine maritime forces in the South China Sea and a routine patrol by the USS John C. Stennis in the region following its participation in exercise Balikatan.

Additionally, Carter noted the U.S. will stand up a rotational, combined command and control element at Camp Aguinaldo after the conclusion of exercise Balikatan. Approximately 80 personnel will comprise the initial rotation of this forward coordination element, with Marines from the 3rd Marine Expeditionary Brigade forming the nucleus and representation from the U.S. Navy, Army and Air Force. The element will support increased operations, activities and actions in the region, and will enhance combined command and control capabilities between both nations.

“There is going to be regular, periodic presence here of American forces,” said Carter during the April 14 joint press conference in Manila. “It may change in its nature, timing and duration, depending on what we and the Filipinos decide is optimal.”