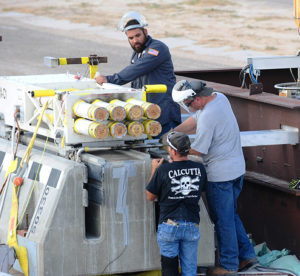 Technicians from the 846th Test Squadron at Holloman Air Force Base, N.M., prepare a rocket-propelled sled for a launch here Aug. 18, 2015. Teams of engineers, technicians and computer program experts all worked together to break the world record for speed on a magnetically-levitated sled system. The test, taking place March 4 sent the sled accelerating at 633 mph — shattering the previous record of 513 mph.

A steady voice reads through a crackling radio atop a roughly hewn 2×4 wooden shelf, adding lumber to the smells of coffee and aftershave inside the enclosed trailer. Red LED numbers attached to the radio flash their faint light as they drop toward zero.

Rolling chairs anxiously scrape across the trailer floor as the four men position themselves to better see through a dirty window. They train their eyes toward the track a quarter of a mile away.

Half a year of long days in the New Mexico sun brought them to this moment. Now, a heartbeat away, they will find out if it has been worth it. 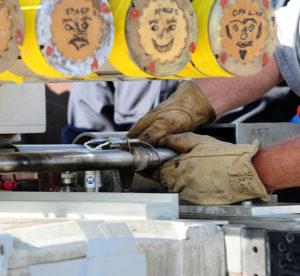 A technician from the 846th Test Squadron at Holloman Air Force Base, N.M., helps prepare a sled for a launch here Aug. 18, 2015. This magnetically-levitated sled system tests weapon system components in a controlled environment.

Everyone in the trailer holds their breath in anticipation for t…

A violent explosion from the track rocks the trailer and everyone inside.

A firestorm erupts behind a 2,000-pound, magnetically-levitated sled as it races across the nearly frictionless track.

Accelerating at 928 feet per second, the world’s only Maglev sled system leaves behind a cloud of dust and a world record–the second time that week.

The 846th Test Squadron broke their own world record for speed on a magnetically-levitated sled system at Holloman AFB on March 4.

“Today was the fastest test we’ve ever done with the Maglev,” said Lt. Col. Shawn Morgenstern, the Commander of the 846th TS. “We went 633 miles per hour. Wednesday we went 513 miles per hour, and prior to that we went 510—which was a couple years ago.”

This accomplishment didn’t happen overnight. In fact, it took almost six months of planning to prepare for the launch. 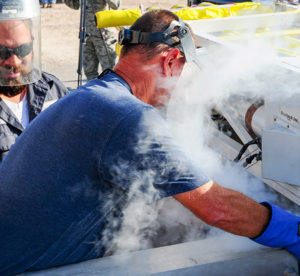 Technicians from the 846th Test Squadron at Holloman Air Force Base, N.M., pump liquid helium into a test sled here Aug. 18, 2015. This sled system runs on four super-conducting magnets that need to be cooled down to a few degrees above absolute zero to ensure the smoothest ride possible.

“It’s a few months of preparation,” said 2nd Lt. Natalia Ocampo, the 846th TS rocket sled project manager for the launch. “We all work really hard to get the procedures very clear and step by step. Then everything seems to go very smooth.”

Ocampo was responsible for overseeing every aspect of the launch. After countless hours researching, training and preparing, the day finally came.
“It was nerve-racking!” Ocampo said. “But as a team we all got together and achieved.”

This launch broke the world record they had set just two days before; before that, the last successful mission launched in 2013.

This magnetically-levitated sled is a one-of-a-kind system that uses powerful magnets to steady a rocket-propelled sled on a 2,100 foot-long track. In order for the magnets to work properly, engineers must first cool them to four degrees Kelvin above absolute zero—four degrees above the coldest an object can possibly get. This ensures the smoothest ride possible.

“We use very cold liquid helium to essentially levitate the sled via super-conducting magnets,” Morgenstern said. “The Maglev system gives us the ability to test systems without much vibration. If you have sensitive components that are a part of a weapon system and you want to test them in a realistic environment, a system like this allows us to do that. We measure those vibration environments at various speeds to understand what the system is really capable of as we continue to go faster and faster.” 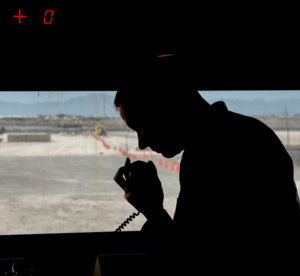 Lt. Col. Shawn Morgenstern, commander of the 846th Test Squadron at Holloman Air Force Base, N.M., relays information via radio after a successful launch here March 4. Teams of engineers, technicians and computer program experts all worked together to break the world record for speed on a magnetically levitated sled system twice in one week. The test sent the sled accelerating at 633 mph — shattering the previous record of 513 mph.

Teams of individuals with unique skill sets all contribute to the 846th TS’s mission.

Despite their effort, no experiment is perfect. The TS experienced a few uncontrolled variables during their test–nothing they couldn’t handle.
While the test may not have gone exactly as planned, the team’s focus remains on track.

“What we have planned to do after this test is refine the design of the sled itself,” Morgenstern said. “We want to look at some lighter materials and continue to see what kind of capability we can get out of this system in terms of the speeds that we’re capable of going.” 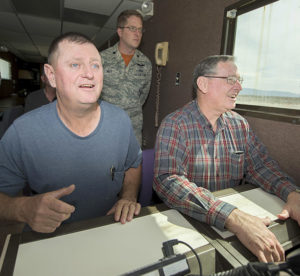 Members of the 846th Test Squadron at Holloman Air Force Base, N.M., watch as another world record is set at the magnetically-levitated sled system here March 4. High-fives and handshakes followed the second successful launch that week–breaking their own world record of 513 mph with 633 mph.

“Go Mach 10” is the 846th TS’s motto. Mach is a measurement of the speed of sound. Mach 1 representing the speed of sound at 761.2 mph. Mach 10 is a hypersonic speed–reaching 7672.69 mph. This motto speaks to the never-ending determination the TS has to continue to improve themselves.

“I just feel lucky to have the opportunity to be here doing testing like this,” Morgenstern said. “It’s really an honor to be a part of it. Hopefully when I’m gone they’ll continue to do great work and develop new and better capabilities in the future.”