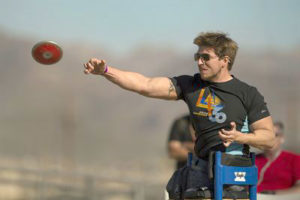 Medically retired Army Staff Sgt. Timothy Payne competes in seated discus during the Army Trials at Fort Bliss, Texas, April 1, 2015. Payne is slated to compete at the 2016 Invictus Games held May 8-12 at the ESPN Wide World of Sports Complex at Walt Disney World in Orlando, Fla.

As more than 500 disabled athletes from 15 nations take the field to compete in 10 sporting events May 8-12 during the Invictus Games in Orlando, Fla., one former 82nd Airborne Division infantryman said he will be focused on earning medals for his team, knowing his faith will carry him through.

Timothy Payne, a medically retired Army staff sergeant who served for 11 years, will compete with the U.S. Armed Services team in swimming and discus. He said his life changed during a mission in Kandahar, Afghanistan, after he made a deal with God.

Medically retired Army Staff Sgt. Timothy Payne competes in seated discus during the Army Trials at Fort Bliss, Texas, April 1, 2015. Payne is slated to compete at the 2016 Invictus Games held May 8-12 at the ESPN Wide World of Sports Complex at Walt Disney World in Orlando, Florida.

“I made a deal with God to spare me instead of killing me for killing the bad guys,” he said. “I said, ‘Why don’t you just take my legs instead of taking my life?’ And the next day, I got blown up, died and came back. Now, I’m just trying to stay motivated and be an inspiration to other soldiers.”

On July 3, 2011, Payne stepped on a 25- to 35-pound improvised explosive device that was either pressure plated or command detonated, and he lost both of his legs above the knees. He also lost some fingers and a portion of his left arm, and he had to learn to become right-handed. He had several surgeries and received more than 100 units of blood.

As he was recovering from his injury, Payne said, he also dealt with his brother-in-law’s death. He said it was during this dark time that he found his faith.

“I was suffering from depression. I was suicidal. I had all these different issues and kept it all to myself,” Payne said. “I decided to read the Bible and asked Jesus to take all my anger and everything away. And he did. And now, I’m just staying positive, motivated and clear-minded. You have to cleanse the body, cleanse the mind and strengthen the spirit. I just try to push on, stay motivated and share my story with other people.”

He said his faith also helped him become more resilient. When he joined the Army after Sept. 11, 2001, he said, he wanted to serve in Special Forces and become an Army Ranger.

“After 9/11, I wanted to work with the best to get to the head of the snake to kill terrorism at the heart. I wanted to get the bad dudes,” said Payne, who had completed two duty tours in Iraq before his tour in Afghanistan. “Before I got hurt, I was so focused on training for special operations that I tried out twice, but got injured and selected for a different job. … But after I got blown up, I just changed. God took my trigger finger away, too. He wants me help save lives and live in peace. I would never have found Jesus unless I had lost my legs, because I was so focused on the mission at hand, destroying the enemy and protecting our country. That all changed, and it’s a blessing. I just do what I can now for others, and I just keep on going.”

Payne now travels and speaks to other veterans to share his story and has written a book about his experience: “The Squad Leader’s Bargain.”
Payne also turned to sports to stay active. He participated in the Chicago, New York City, Los Angeles and Boston marathons with the help of the Achilles Freedom Team, and he scuba dives through the Soldiers Undergoing Disabled Scuba Diving program.

“I try to swim a mile or two every day,” he said. “When I got hurt, the doctors preached mind, body and spirit. If I keep my body strong and active and just keep going, then it’s going to help strengthen my mind. It also keeps my mind occupied, too, so I don’t dwell on bad things. With all these different sporting events, you’re focused on training — you’re building your muscles up, and you’re just staying motivated and positive. It’s the best thing for me. I don’t want to just sit around and waste time. I just always want to be out and doing something and interacting with others, sharing my story.”

“I’m motivated, and I’m just going to do the best I can and be a good team player,” he said. “I’m motivated to portray the best example I can for my country. Events like Invictus are important, because we’re all in this together.”

The Invictus Games will be held at the ESPN Wide World of Sports Complex at Walt Disney World.