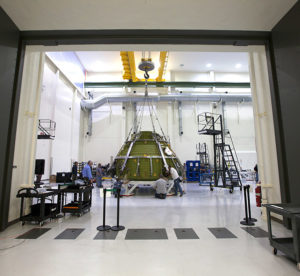 Lockheed Martin engineers and technicians prepare the Orion pressure vessel for a series of tests inside the proof pressure cell in the Neil Armstrong Operations and Checkout Building at NASA’s Kennedy Space Center in Florida.

The crew module is the living quarters for astronauts and the backbone for many of Orion’s systems such as propulsion, avionics and parachutes.

In order to certify the structural integrity of the crew module it was outfitted with approximately 850 instruments and subjected to 1.25 times the maximum pressure the capsule is expected to experience during its deep space missions. That means about 20 pounds per square inch of pressure was distributed over the entire inner surface of the spacecraft trying to burst it from within. As a next step, the team will use phased array technology to inspect all of the spacecraft’s welds in order to ensure there are no defects.

Once the primary structure of the crew module has been verified, the team will begin the installation of secondary structures such as tubes, tanks and thrusters. Once those pieces are in place, the crew module will be moved into the clean room and the propulsion and environmental control and life support systems will be installed.

“Our experience building and flying Exploration Flight Test-1 has allowed us to improve the build and test process for the EM-1 crew module,” said Mike Hawes, Lockheed Martin Orion vice president and program manager. “Across the program we are establishing efficiencies that will decrease the production time and cost of future Orion spacecraft.”

During EM-1 Orion will be launched atop NASA’s Space Launch System (SLS) for the first time. The test flight will send Orion into lunar distant retrograde orbit – a wide orbit around the moon that is farther from Earth than any human-rated spacecraft has ever traveled. The mission will last about three weeks and will certify the design and safety of Orion and SLS for future human-rated exploration missions.