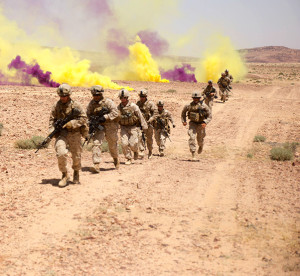 Using smoke grenades to cover their avenue of approach toward their targets, U.S. Marines from Easy Company, 2nd Battalion, 2nd Marine Regiment, charge through clouds of smoke during their last live-fire event of Eager Lion 15 around Quweyrah, Jordan, May 19, 2015. Eager Lion 16 will take place May 15-24, 2016, in Jordan.

U.S. troops will partner with Jordanian military forces May 15-24 in Jordan during Exercise Eager Lion 16, one of U.S. Central Command’s premier exercises, Centcom officials announced May 13.

Eager Lion 16 will consist of a week-long series of simulated scenarios to facilitate a coordinated partnered military response to conventional and unconventional threats, officials said.

The exercise scenarios will include border security, command and control, cyber defense and battlespace management, they added.

About 6,000 military personnel, including representatives from Centcom headquarters and its air, land and maritime components will support the exercise, officials said.