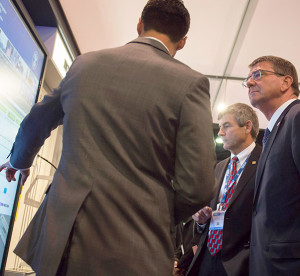 Defense Secretary Ash Carter speaks with an exhibitor at the Navy League’s Sea-Air-Space Exposition at National Harbor, Md., May 17, 2016. Carter delivered remarked at the event.

Defense Secretary Ash Carter highlighted his budget priorities May 17 while warning he would recommend a veto of the National Defense Authorization Act if it contains a “raid on war funding” that puts national security at risk.

He stressed the importance of the sea services, saying the military is meeting today’s evolving security challenges in part because of the nation’s sailors, Marines, Coast Guardsmen and Merchant Marines.

Carter said he witnessed the great work of the men and women taking on these challenges during visits in the South China Sea aboard the aircraft carriers USS John C. Stennis and USS Theodore Roosevelt; in Tallinn, Estonia, with the sailors of the amphibious transport dock ship USS San Antonio; and in the Persian Gulf on the amphibious assault ship USS Kearsarge.

Carter said the United States is facing no fewer than five emerging challenges: Russian aggression, particularly in Europe; Chinese actions of concern, notably in the South China Sea; North Korean continued nuclear pursuits and provocations; Iranian aggression and “malign influence” in the Gulf; and terrorism and countering the Islamic State of Iraq and the Levant.

Defense investments are critical in staying ahead of global challenges and maintaining the finest fighting force in the world, the secretary said, adding that he is concerned about versions of the defense funding bill in Congress.

Carter said he would recommend to President Barack Obama that he veto the legislation if the final version includes a “raid on war funding that risks stability and gambles with war funding, jeopardizes readiness, and rejects key judgments of the department.”

Carter said he wants to work with Congress to achieve a better solution, adding: “Our war fighters deserve nothing less.”

DOD investments focus on technology development, operational concepts and organizational constructs, the secretary said. These investments are critical, he added, because the military must have the agility and ability to win its current fights, as well as the wars of the future. 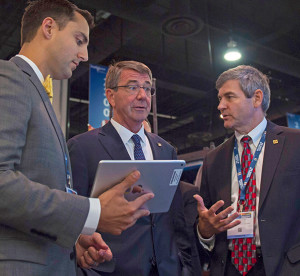 Defense Secretary Ash Carter speaks with an exhibitor during the Navy League’s Sea-Air-Space Exposition at National Harbor, Md., May 17, 2016.

The proposals, he said, are to maintain the military’s “technological superiority and ensure we always have an operational advantage over any potential adversary.”

Specifically for the Navy, the budget refocuses on building lethality for high-end conflicts.

“We’re looking at our overall warfighting posture, rather than the presence that contributes to it, in determining whether our maritime forces can deter and, if necessary, fight and win a full-spectrum conflict,” Carter said.

Men and women in uniform are operating in an increasingly competitive and changing world, particularly when it comes to technology, he said, m aking investments in commercial technology so important.

The Defense Department, he noted, is investing aggressively in high-end innovation to enhance asymmetric, hybrid capabilities.

The Senate version of the defense funding bill, Carter said, extensively reorganizes the functions of the undersecretary of defense for acquisition, technology and logistics. Separating research and engineering from manufacturing could introduce problems, he said, adding that procurement and sustainment are tightly coupled to technology, engineering and development.

“Separating these functions makes no sense, as procurement and sustainment costs are controlled by decisions made during development,” he said.

The House version of the bill contains “budget gimmickry” that threatens readiness, putting the warfighter at risk, Carter said. That approach, he added, is deeply troubling and flawed. “Most disturbingly, it raids war funds at a time of war, when we have men and women deployed in operations in Afghanistan, Iraq and Syria,” he said.

It also threatens budget stability and the readiness of the force, he said, noting that it proposes underfunding DOD’s overseas warfighting accounts by $18 billion, and instead seeks to spend that money on programmatic items DOD did not request. That version of the bill threatens a return to sequestration and $100 billion in looming automatic cuts beginning next year, he said.

“It’s another road to nowhere, with uncertain chances of ever becoming law and a high probability of leading to more gridlock and another continuing resolution,” he told the audience. That version, he said, “undercuts stable planning and efficient use of taxpayer dollars, dispirits troops and their families, baffles friends, and emboldens foes.”