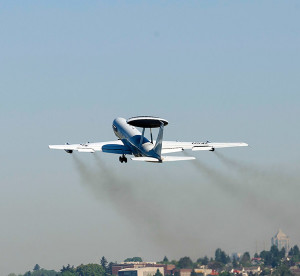 An E-3 Sentry (AWACS), with an upgraded Flight Management System Suite, takes off for a test flight in Kent, Wash., April 20, 2016. The upgrades, being managed by a program office at Hanscom Air Force Base, Mass., eliminate diminishing manufacturing source issues, ensure compliance with current and future air traffic control requirements, and automate the navigation function, allowing for a reduction in cockpit crew from four to three.

The test flight took place on April 20 at Boeing Field in Kent, Wash., as part of the Air Force’s CNS/ATM DRAGON, program, which stands for Communication, Navigation and Surveillance/Air Traffic Management Diminishing Manufacturing Sources Replacement of Avionics for Global Operations and Navigation. Officials have said the benefits springboard the AWACS platform into the future while reducing overall system maintenance and sustainability costs.

The program now enters the flight test qualification phase to prove out any unique Air Force requirements. Following that, program managers anticipate delivery of modified D1 aircraft to the 552nd Air Control Wing at Tinker Air Force Base, Okla., in May 2017. There, the aircraft will undergo government operation test and evaluation and then production modification for the rest of the fleet, to be accomplished by the depot staff at Tinker AFB beginning in 2018.

The CNS/ATM DRAGON program is a cooperative program between the U.S. and NATO. NATO’s first aircraft, known as N1, completed testing in April and is nearing completion of the full EMD phase.

“This program is a great example of international cooperation benefiting both partners, as the U.S. and NATO AWACS fleets are about 95 percent common in design,” LaMuro said. “We have incorporated the efficiencies and learned lessons from the NATO N1 aircraft in the U.S. Air Force aircraft design, reducing the overall shared costs by tens of millions of dollars for both stakeholders. This truly culminates a successful relationship between NATO and the U.S. and these modifications ensure the critical capability AWACS provides to our warfighters and allies around the world.”