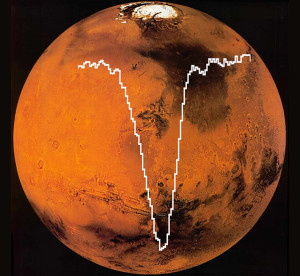 SOFIA/GREAT spectrum of oxygen [O I] superimposed on a Viking 1 composite image of Mars by USGS University of Arizona. The amount of atomic oxygen computed from this SOFIA data is about half the amount expected.

An instrument onboard the Stratospheric Observatory for Infrared Astronomy (SOFIA) detected atomic oxygen in the atmosphere of Mars for the first time since the last observation 40 years ago. These atoms were found in the upper layers of the Martian atmosphere known as the mesosphere.

“Atomic oxygen in the Martian atmosphere is notoriously difficult to measure,” said Pamela Marcum, SOFIA project scientist. “To observe the far-infrared wavelengths needed to detect atomic oxygen, researchers must be above the majority of Earth’s atmosphere and use highly sensitive instruments, in this case a spectrometer. SOFIA provides both capabilities.”

The Viking and Mariner missions of the 1970s made the last measurements of atomic oxygen in the Martian atmosphere. These more recent observations were possible thanks to SOFIA’s airborne location, flying between 37,000-45,000 feet, above most of the infrared-blocking moisture in Earth’s atmosphere. The advanced detectors on one of the observatory’s instruments, the German Receiver for Astronomy at Terahertz Frequencies (GREAT), enabled astronomers to distinguish the oxygen in the Martian atmosphere from oxygen in Earth’s atmosphere. Researchers presented their findings in a paper published in the journal Astronomy and Astrophysics in 2015.

SOFIA is a Boeing 747SP jetliner modified to carry a 100-inch diameter telescope. It is a joint project of NASA and the German Aerospace Center. NASA’s Ames Research Center in Moffett Field, Calif., manages the SOFIA program, science and mission operations in cooperation with the Universities Space Research Association headquartered in Columbia, Md., and the German SOFIA Institute (DSI) at the University of Stuttgart. The aircraft is based at NASA’s Armstrong Flight Research Center’s hangar 703 in Palmdale, Calif.