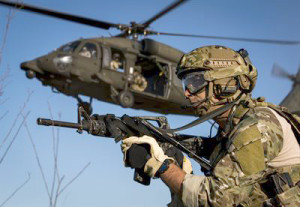 There have been warnings for some time indicating that readiness and training would suffer amid sequestration spending cuts and in the budget uncertainty of the last few years, Peter Cook said.

“Ultimately, there’s a price to be paid for budget gridlock, particularly with the Department of Defense,” he added.

The Defense Department’s $582.7 billion budget request for fiscal year 2017 takes the needs of the services into account, Cook said, and it includes significant and aggressive investment in dealing with readiness issues. Defense Secretary Ash Carter has been vocal about the need for continued budget certainty and investments in modernization, force structure and readiness, Cook pointed out.

The budget plan seeks to address readiness and training concerns in the “most effective and efficient way possible,” Cook said. Moving forward will take time, using the resources the department has available, he added.

“We’d all like more money to try to address this right away overnight, but that’s not the reality of the budget situation we’re in,” he told reporters.
Carter heard directly from the services about their needs, Cook said, and the proposed budget puts forth a plan to allow the national security mission of the country to be carried out.

“This has to be an investment over time, which is why budget certainty and planning going forward — not just this fiscal year, but going forward — is also so important to the secretary of defense,” the spokesman said.