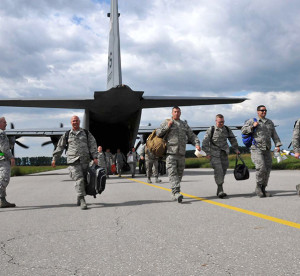 U.S. Air Force and Massachusetts Air National Guard members, previously stationed at Amari Air Base, Estonia, are reunited with their 104th Fighter Wing members stationed to Graf Ignatievo, Bulgaria, May 27, 2016. Wing members are part of a theater security package deployed to multiple European locations in support of Operation Atlantic Resolve. Operation Atlantic Resolve focuses on conducting training alongside NATO allies and partners to strengthen interoperability and demonstrate U.S. commitment to a Europe that is whole, free, at peace, secure and prosperous.

The airmen, originally assigned to the 104th Fighter Wing, Barnes Air National Guard Base, Mass., deployed to the European theater April 3, as part of a theater security package to Iceland, Estonia, the Netherlands and Bulgaria in support of Operation Atlantic Resolve.

At the same time, eight F-15s and 150 personnel and equipment deployed to Leeuwarden Air Base, Netherlands, to participate in Frisian Flag 2016 and conduct training alongside NATO allies and partners.

While deployed to Keflavik Air Base, the Bay State guardsmen acted as rotational stateside total force Airmen reinforcing existing U.S. Air Force capabilities to show a forward presence in Europe. Since 2008, the U.S. Air Force has conducted an air surveillance mission there as part of NATO’s commitment to Iceland’s security and defense.

“We were sitting with live loaded jets ready to intercept in the region if needed,” he said.

“We were in the Netherlands to support our NATO allies and also for Frisian Flag, where we integrated with coalition partners for a multidimensional exercise,” said U.S. Air Force and Massachusetts ANG Maj. Benjamin Gilluly, a 131st EFS F-15 pilot. 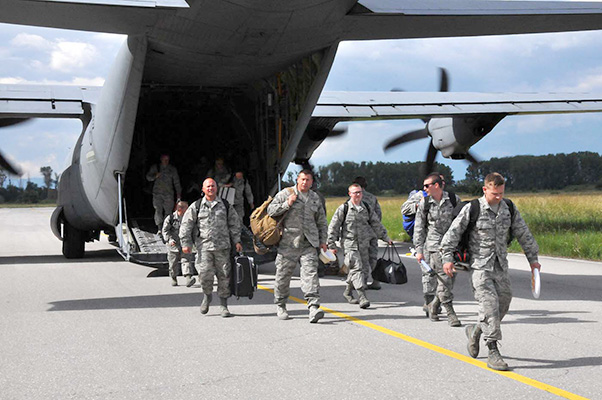 “It was an air-to-ground exercise, and our mission was to provide top cover for the forces on the ground,” said U.S. Air Force and Massachusetts ANG Lt. Col. Matthew Woodfield, 131st EFS F-15 pilot. “It depended on the day which side we would be on – good or bad.”

“It’s important for us to have U.S. forces here; we are not able to create a realistic tactical picture to fight on our own,” said Bulgarian air force Lt. Col. Metodi Orlov, Graf Ignatievo operations officer. “The National Guard is helping us receive a good sense of modern warfare.”

U.S. Air Force and Massachusetts ANG Lt. Col. David Halasi-Kun, 131st EFS commander, said his Airmen, both when in the Netherlands and now in Bulgaria, conducted and will conduct all phases of small- and large-scale air-to-air training.

“Our goal is to build partnerships with our NATO allies through joint training exercises and operations,” he said.

Guardsmen arriving from Estonia to Bulgaria will join their 104th FW counterparts and will remain in place until the end of June when the 144th FW takes over the TSP mission utilizing eight Massachusetts F-15s.