Airmen who pinned on their next rank this month at Edwards Air Force Base, Calif., got an extra special promotion ceremony in the base theater June 1.

Secretary of the Air Force Deborah Lee James presented the newly promoted Airmen with their certificates during a combined enlisted promotion ceremony and base all call.

A packed house watched as the 23rd SECAF congratulated the promotees and administered the enlistment oath.

Secretary James arrived May 31. During her visit she was presented with program briefs, met with Airmen and visited the U.S. Air Force Test Pilot School and Benefield Anechoic Facility.

She also met with base leadership on issues affecting the base community.

“The work you do here at Edwards — developmental testing of the systems of tomorrow not yet in our inventory, but also the systems of today that we are constantly approving upon, is absolutely critical for the warfighter,” James said. “That’s another reason why days like today are so valuable. There’s simply no substitute for going out and seeing the work and meeting some of the people performing that work and getting direct feedback.”

Following the promotion ceremony, James spoke about the current state of affairs for the Air Force and reflected on her two-and-a-half years as Secretary.

“There is no question in my mind that the five core missions of the Air Force, the five things we do best, are absolutely critical to every single operation going on everywhere around the world. Everywhere I go, people want more of what you do.”

James commended the Edwards workforce for playing a critical role in making sure Air Force systems are upgraded, and if weapons systems are going to have problems it is going to be identified in test and not in the field.

“It saves lives and saves money right on down the line,” said James. 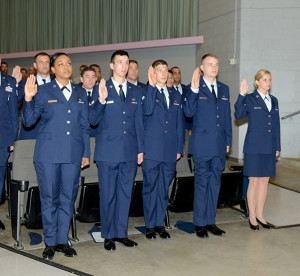 Airmen recite the oath of enlistment during a promotion ceremony here. Ceremony was performed by Secretary of the Air Force Deborah Lee James during her visit to Edwards June 1.

Regarding the current operations tempo, James addressed how the Air Force continues to do the mission even with aging aircraft and manpower and fiscal challenges.

“Everywhere we go, people want more Air Force. We’re the busiest Air Force, the busiest military we’ve ever been, at least in the 30-some years I have been an observer on the scene. However, we are also the smallest we have been since our inception as a separate service in 1947. People don’t realize that.”

James said the Air Force has 200,000 less Airmen than in the 1990s. And yet the Air Force is globally engaged in all U.S. military operations, from fighting terrorists to conducting humanitarian missions. She reiterated the importance of Edwards AFB in its role of helping the Air Force maintain its mission.

“Again, this comes back to your important role, you’re stretching out the life of our fleet with your improvements on these older aircraft and that’s important to us,” James said.

James addressed items she’s working on back at the Pentagon, including increasing the Air Force’s active duty end strength gradually over the next few years with a 6,000 to 7,000 increase this coming year. Ultimately, she envisions an Air Force of 321,000 active duty Airmen. The increase will aid in manpower shortages in realms such as maintenance, cyber and remotely piloted aircraft.

She added that the modernization portion of the budget is strong, but concession were made to maintain readiness and maintenance of current systems. Secretary James also urged the audience to pay attention to changes in the military retirement system coming in the next year and a half.

Before taking questions from the audience, she thanked Team Edwards for their hard work and service.