A small but dedicated crowd gathered in the Veterans Court of Honor at the Lancaster Cemetery during the 20th Annual Memorial Eve Candlelight Ceremony to pay respect to those who gave their lives defending freedom.

The event is presented by the Antelope Valley Detachment #930 Marine Corps League.

“Where would we be if we didn’t have people protecting us every day?” asked Palmdale Mayor Jim Ledford. “What would you do if somebody put their life in jeopardy to protect you? I’m here to say thank you.”

“It is very important to pass on our traditions to the next generation and to never forget the price of freedom.”

Assemblyman Tom Lackey who represents more than 500 thousand people said that when somebody gives you a gift, you say thank you.

“The sacrifices of the American military over the years are what provides Americans liberty. I pray we are all mindful of the sacred sacrifice that so many Americans have made and continue to make.” 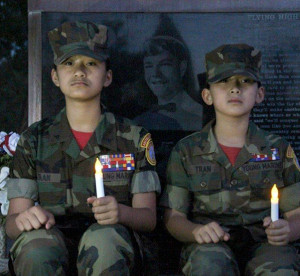 “Being thankful brings value to life, it brings joy and a quality to life, even in the darkest hours.” Quoting John 15:13, Romo reminded guests that laying down one’s own life to save another is the greatest sacrifice of all. “People that we don’t know, or never knew us, laid down their lives to protect the freedoms we have today — for that, we must always remain thankful.” He also reminded people to not live a mundane life, to live it to the fullest and to serve others.

On behalf of the City of Lancaster, Pastor Henry Hearns presented Chris Chandler, commandant of Antelope Valley Detachment #930, a certificate of appreciation.

“Because of the sacrifices made, we in America and other parts of the world live in freedom. We have the freedom to gather, to worship, to be idiots and to argue if we want — we have that privilege,” said Hearns.

Chaplain Larry Pratt of the Quartz Hill VFW 3000 served in Vietnam and said that more than 1 million men and women died serving in the U.S. military since the nation’s birth. Losing three close friends in combat, he said their loss has left an indelible mark. “You never forget what you see in war.”