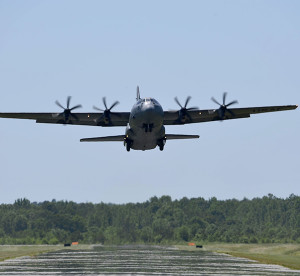 The Air Force Life Cycle Management Center’s Mobility Directorate signed a multiyear contract with Lockheed Martin to procure 78 C-130J Super Hercules with the option to buy up to 83 over the next five years.

The agreement is the second multiyear contract for the C-130J and it saves the Defense Department about $680 million and provides the Air Force, Navy and Coast Guard with important airlift capabilities.

“This contract is significant because it provides the taxpayer with the best bang for their buck and allows our customers, including the Marine Corps, Coast Guard, Air Force Special Operations Command, and Air Force Mobility Command, to save money and use it for other requirements,” said Joseph Fountain, a supervisory contract officer with the Mobility Directorate and lead negotiator on the contract with Lockheed.

Acquisition experts from the Mobility Directorate negotiated for three years to finalize the details of the contract which will provide new aircraft to replace legacy C-130H models and add to the J models currently in the Air Force fleet.

The J model is an improvement on previous models in that it brings enhanced avionics and propulsion systems to the fight, providing additional aircraft range, higher maximum speed and shorter takeoff distance.

According to Fountain, the benefit of multiyear contracts versus year-to-year contracts is that they provide stability and cut costs. It allows Lockheed to sign long term supplier agreements and commitments, and invest in new equipment to produce the aircraft.

The contract also funds an affordability program in which Lockheed receives $35 million up front and agrees to $65 million in labor reductions over the life of the contract, which according to Fountain will allow the company to assemble the aircraft more efficiently.

Kevin Buckley, the program executive officer for the Mobility Directorate, said that the contract is an example of the directorate’s commitment to providing the warfighter with vital airlift capabilities at an affordable cost.

“The men and women on our team are motivated by the fact that the work we do directly impacts the warfighter,” Buckley said. “I’m extremely proud of the team and I know we will continue to provide war-winning weapon systems.”