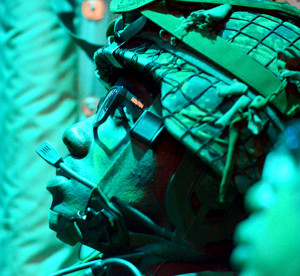 A soldier with 3rd Battalion Princess Patricia’s Canadian Light Infantry rests aboard a C-130 aircraft on its way to Canadian Forces Base Cold Lake, where 3rd Battalion Soldiers will board American helicopters and assault nearby enemy positions throughout the night as part of Exercise Maple Resolve, May 27, 2016. The operation utilized both Canadian and American aircraft in order to demonstrate 3rd Battalion’s ability to project force across great distances.

FORCES BASE WAINWRIGHT, Canada–It is one of the few hours of darkness in Alberta, leaving the big grey brute in the sky without a shadow to cast. The C-130’s four turboprop engines cut through the clouds.

When runway lights become visible on the horizon, he pitches his nose downward and descends. Cradled in his arms, rows of sleeping soldiers sit bathed in soft green light. Men slump against one another like limp action figures – an oddly intimate moment in an otherwise busy military exercise.

Their alertness soon grows with the acceleration of the aircraft. Helmets are donned, hands slide into gloves, and murmurs begin to swirl. The bustling of the crew chiefs confirms everyone’s guess: it is time to hit the pavement. Soon there is a floating sensation in the stomach followed by a forceful thud as tires make contact with the runway. The aircraft crawls to a standstill. And then … nothing.

These moments before the ramp drops always bring the most tension. It is not fear, however, but eagerness. When it is finally time to leave the brute’s embrace, Soldiers hustle down his ramp and into the beams of light lining the perimeter of Cold Lake. Maple leaf patches on their shoulders become visible.

Canadian Forces Base Cold Lake is a busy place tonight. So what is all the fuss about? Occurring here is the first major operation in the largest joint military exercise Canada’s army has to offer: Maple Resolve.

Just what is Maple Resolve and why does it matter? In the immediate sense, it is a giant gathering of coalition forces. Over 6,000 Canadian troops, 1,200 American Soldiers, and approximately 150 members of the British military have all rendezvoused at a small camp named Wainwright. There they will have the opportunity hone their fighting skills by confronting conventional and hybrid threats in a joint, integrated, multinational environment. This year the exercise will last from May 23 to June 6.

In the grand scheme, Maple Resolve strengthens the bonds between these three allies and provides a glimpse into the future of military conflict. Wars of the future will continue to involve the collaboration of multiple nations — no one fights alone anymore.

A key element in this joint exercise is the exchange of aviation assets. This particular night has Canadian piloted CH-47 Chinooks and U.S. manned UH-60 Black Hawk helicopters. They will be working together to transport Canadian infantryman from CFB Cold Lake to attack nearby objectives. At these sites the Canadians will fight the opposing force — played by the British military.

Outside a massive jet hangar stands an equally large man named Maj. Cole Petersen. An infantryman hailing from Cornell, British Columbia, he is the Deputy Commanding Officer for the 3rd Battalion Princess Patricia’s Canadian Light Infantry. It is a versatile combat unit dating back to World War I, and has the capability of conducting both airborne and mountain operations.

Petersen watches his men on the flight line prepare for the arrival of helicopters. “We wish to demonstrate the ability to rapidly project force across long distances through the use of air power,” he explains. “It is very much a team effort between the infantry and the aviators to project that force.”

Before long the rumble of other aircraft approach the runway. In response, the brute pivots around to face his intruders. A pack of three Black Hawk helicopters swoop in and reveal themselves. They are American friends. When they set down on the tarmac their crew chiefs step out of the mechanical birds and signal to the Canadians it is time to go fight.

Among these aviators is U.S. Army CWO3 Joel N. Barlow of Company A, 1st Battalion, 168th Aviation Regiment. He and his crew are a long way from their home in Boise, Idaho, but seem to be enjoying the mission and thrill of flying outside the U.S.

“It is a great opportunity for us to learn from the Canadians. I think they are happy we are here to help support this exercise,” Barlow remarks. “The mission … certainly stands out in my mind. It was complex, it was exciting, and it was a lot of fun to do.”

Troops approach the birds and begin stepping through the slide doors of Barlow’s Black Hawk. The transition is busy but orderly. Soon reports come in Canadian Chinooks are also inbound, and suddenly CFB Cold Lake starts to feel a bit crowded. Regardless, Petersen surveys the scene with no signs of distress visible on his face.

“The most difficult part of this operation has actually been the planning,” the major says. “This operation encompassed a parachute assault, a tactical air landing operation, as well as an air assault by aviation elements from two different nations — all within the span of 12 hours.” Coincidentally Barlow would later comment on the planning of tonight’s operation too.

“The Canadians seem to be pretty squared away. They show up to do business,” he said. “I’ve been really impressed with their flight planning process — how they meticulously plan the missions.”

The last infantryman quickly hops aboard as the crew chief slides the door shut behind him. With the Black Hawks full, Barlow and crew take off with their Canadian cargo.

“I hope the junior Soldiers will understand how versatile working with the [Canadian] Air Force or U.S. Army aviation makes them,” Petersen says. “We have a lot of coalition assets because that is the way all of our operations have been for the last 15 to 20 years.”

It is calm for a moment after the U.S. birds disappear. The pause is short-lived, however, by the approach of Canadian Chinooks. The brawny twin-engine helicopters waste no time landing in front of the next wave of troops.

The Chinook is the helicopter equivalent of a tank. It is a massive flying machine weighing roughly 12 tons and capable of speeds over 190 mph. They have operated in almost every environment imaginable, from the deserts in Iraq to the frozen fields of Antarctica. But most important of all is their ability to carry anywhere from 30 to 50 troops over 1,400 miles one-way.

When heavy lifting is needed, the Army calls in Chinooks. Yet even the toughest workhorse has its bad nights.

The Chinooks receive the last remaining troops and raise their ramps. After the aircraft begin to leave CFB Cold Lake it soon becomes apparent something is wrong. Radio communication reveals one of the helicopters in the formation has an engine failure. It decides to return. Despite a full load of troops inside, limited visibility, and one engine, the pilot skillfully sets the bird down safely.

“That guy … just landed a Chinook with one engine …” an awed onlooker remarks.

The men of C Company march off the wounded Chinook and move inside the hangar. Perhaps disappointed they are not with their comrades, the troops are no doubt thankful they made it to the ground in one piece. Meanwhile, kilometers away, a battle begins to rage.

The mission could still go forward despite the setback, Petersen later explained. “We plan ahead for these sort of things.”

In the midst of the excitement something went missing. The large grey brute is now gone. Taken to the skies again. He, like his U.S. and Chinook compatriots, still has much work left to do before the night is over.