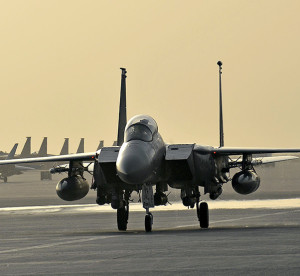 An F-15 Eagle taxis on the flight line in an undisclosed location in Southwest Asia. Throughout the month of May, the air coalition has been able to strike lucrative targets including: logistics lines, command and control and Islamic State of Iraq and the Levant financial resources through more than 1,800 strike sorties.

Throughout the month of May, the air coalition has been able to strike lucrative targets including: logistics lines, command and control and Islamic State of Iraq and the Levant financial resources through more than 1,800 strike sorties.

“My goal as the air component is to actually put pressure on (ISIL) wherever they are,” said Lt. Gen. Charles Q. Brown, the U.S. Air Forces Central Command commander, during a recent press briefing in Washington, D.C. “I’m always pressing pretty hard to use our airpower as much as possible.”

The air coalition has an array of precision capability available to strike targets and defend the region.

Weapon systems officers assigned to the 380th Air Expeditionary Wing discussed their combat role and the importance of teamwork when flying and employing precision ordnance from the vantage point of the two-seat F-15E Strike Eagle.

“The great thing about a two-seat aircraft is that we can divide out duties and be more effective,” said Capt. Dan, a WSO assigned to the 380th AEW. “The pilot in the front seat can coordinate for airspace and refueling, while the WSO in the backseat can talk to the joint terminal attack controller on the ground, find a target and have a weapon ready to drop.”

“The aircrew specifically will talk to a half-dozen agencies before even getting to an area where a strike can take place,” Justin said. “In the end it is a very complicated process that takes everyone doing their part to get the bomb on target.”

According to Dan, once in flight, a WSO has several things running through their mind in preparation for strike operations. There are a number of checklist items that must be calculated to ensure precision and accuracy.

“There are dozens of ‘what ifs’ you must consider as well,” Dan said. “You must always be prepared and thinking ahead because it can go from zero to 100 in a split second.”

Justin also discussed the precision and care that is taken when employing targets.

“The targets I’m assigned to destroy have been vetted through the most professional members of our armed services, and (I know) that others are taking their jobs as seriously as I am,” Justin said.

“We are here to provide support to (indigenous) troops on the ground,” Dan said. “So it is a good feeling to know that we can help keep them safe.”

Editor’s note: Due to safety and security concerns, some names were removed.