NTPS is currently the only school in the world qualified to meet these new requirements.

“It was a lot of work but it is well worth the effort,” said Chief Operations Officer Jim “JB” Brown, who took on his new position about six months ago. “It proved we were doing everything we needed to be doing; however, it made us look at ourselves under a microscope so we could make further improvements. We are always open to improvement and to provide the best training possible.”

Brown has flown more than 130 different aircraft, has more than 9,900 flight hours and holds the world record on the most hours flown in stealth fighters.

Brown said the quality of aircraft and the appearance of the school has improved greatly since President and CEO Allen Peterson took over five years ago. “Al runs a tight ship. The planes were all certified and safe, but the fleet was somewhat outdated and could have used some paint. Al has accomplished a significant fleet upgrade and modernization effort to include GPS-based glass cockpits and the addition of medium and high performance jets,” explained Brown. 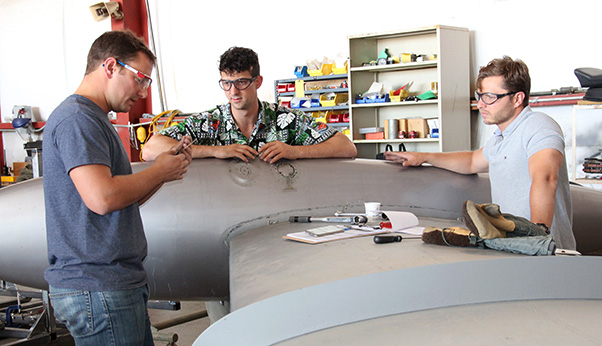 International students enrolled at the National Test Pilot School in Mojave, Calif., work on an aircraft as part of their curriculum.

A couple of years ago, the EASA determined that civilian test pilots must have a rating on their license and, to get that, they had to go to an accredited test pilot school. However, there were no schools that were certified to teach test pilots — not even in Europe.

The reason the EASA went to a test pilot rating was to enable test pilots to work throughout the European Union without having to get license/ratings in each country and to standardize the test pilot licensing requirements.

“So, a couple of years ago, Al and the school went to work to get the certification — it was not a trivial task,” said Brown. The Europeans have very stringent requirements regarding safety and how available aircraft are to the students. “They really dig into the academic curriculum to make sure we have the right people teaching and also that we are testing the students to make sure they will meet the appropriate standard.”

Rigel Hebmann, a former commander of the French Test Pilot School, helped to write some of the regulations in Europe and is now a part of NTPS’s staff. “Rigel has been a tremendous help in interpreting exactly what is expected from the Europeans,” explained Brown.

Two audits were already conducted by the Europeans. “They dug through our books, flew with our instructors, sat in on classes and wrote up a list of requirements they needed us to update before we could be certified. When they came back, those requirements were met and a certification was issued.” Brown said that the EASA will continue to make periodic visits to the school. “We look forward to their visits because it does help us to be the best we can be.”