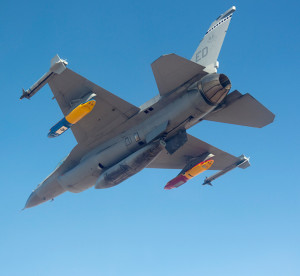 Conceived in 2006, The Reconfigurable Airborne Sensor, Communication and Laser — or RASCAL — pod provides a means of easily installing new instruments and technologies on board aircraft for flight testing.

According to Dan Carroll, program manager for the RASCAL pod, installing the test hardware in the pod, rather than into an aircraft, saves time and money.

“The pod has a tremendous impact on time,” Carroll said. “With current cutting edge technology, flight test equipment needs to be integrated, calibrated, and tested at the sub-system level. This can take weeks or months. We can’t always afford to take an aircraft off the line that long.”

With the RASCAL pod, the integration and calibration is done in the laboratory, then the pod is mounted on an aircraft for the flight tests. Since the aircraft no longer needs to be modified, it is available for other missions.

The pods are also useful for more short-notice projects. One example he cited was a project addition proposed by a customer, the Strategic Capabilities Office (SCO), with just five weeks’ notice before a scheduled flight test. “There is no way to accomplish the approval, design and installation on an Air Force aircraft in that time frame,” Carroll said. “With the pod, it was easily done.”

According to Carroll, DARPA, AFRL, defense contractors and other outside organizations request tests using the pods, or in many cases ask to buy a RASCAL pod.

In 2008 the pods’ size tended to limit the range of tests, since the equipment has to fit in a relatively small space. But the advancement of technology and shrinking of components is increasing the number of projects that can be supported with the pod.

“As things get smaller, more projects are coming in,” Carroll said.

The pods are also evolving, getting upgrades and modifications to further increase their capabilities.

One of the current projects the pod is facilitating is the exploration of alternate navigation systems. Most electronic navigation systems rely on GPS. Should this, for any reason, become unavailable, then a backup system is always helpful. According to Carroll, this new method involves the aircraft looking at the stars overhead to help determine its position, much like sailors traditionally used a sextant, and simultaneously looking at the ground like Google Earth.

The pods – there are currently three of them – are built from the chassis of SUU-20 rocket launchers that were either damaged or modified and could not be returned to service in their original capacity. After intense engineering and mechanical metamorphosis, the RASCAL pod is created.

When the RASCAL pod was originally built, it was envisioned to fly on Edwards F-15s and T-38Bs also, but those aircraft have since left Edwards leaving the F-16 as the sole Air Force platform for the RASCAL pod currently. It has flown on non-Air Force jets, but this is generally expensive and has schedule issues.

They are currently approved to fly up to Mach 1.2 on F-16s and will be cleared to fly on the T-38Cs which get the centerline hard-point upgrade.
“This will increase our test capabilities, and ease the pressure on the F-16 fleet here,” Carroll said.

Flashback: The Navaho Missile, Phase I