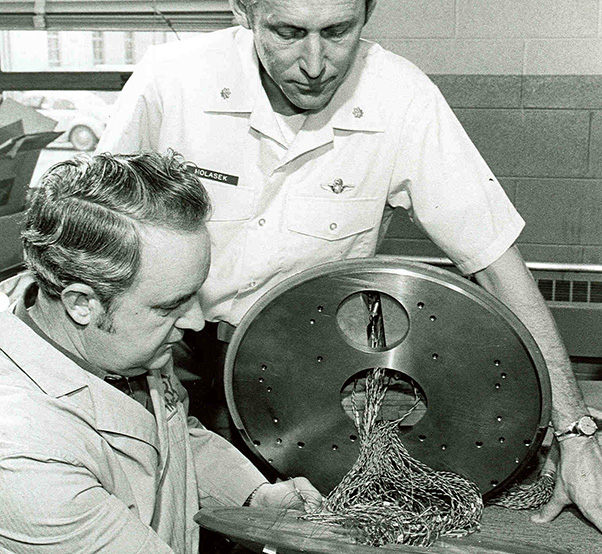 Extensive instrumentation required on the NASA Viking model is shown here before a test at AEDC in 1973 before final assembly. There were 68 sensors to record localized heat buildup around protrusions on the face of the Mars entry vehicle, while 13 heat and five pressure sensors were installed on the base cover. Then Maj. Dale Holasek of the AEDC Directorate of Test watches the assembly by Ray Moore, a test facility craftsman.

The NASA Viking Lander 1 successfully reached the surface of Mars in July 20, 1976, due to the testing AEDC conducted on the launch vehicle and the entry vehicle parachute system.

The Titan III/Centaur launch vehicle for the lander was tested in the Propulsion Wind Tunnel in the mid-1960s and the entry vehicle system was tested in PWT and the von Kármán Gas Dynamics Facility from 1969 through 1973.

Viking testing at the Arnold Engineering Development Center, Arnold Air Force Base, Tenn., focused on how the systems would endure the type of atmosphere and environment surrounding Mars. 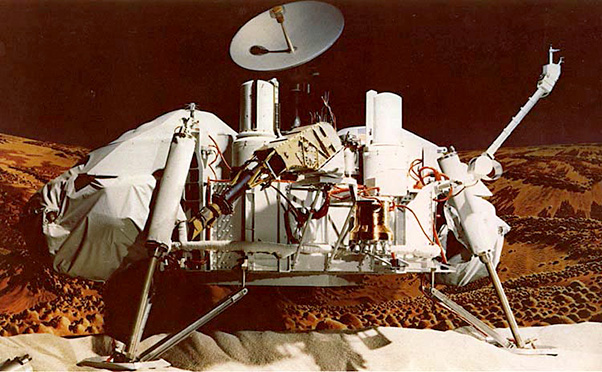 Viking 1 collected samples and conducted biology experiments on Mars to search for signs of living organisms. The distance for Viking to travel to Mars was 500 million miles, which was a trip that took 11 months.

The lander collected data from Mars for more than six years according to a Viking mission overview by NASA in 2015.

The overview also reported, “The landers [Viking 1 and Viking 2] accumulated 4,500 up-close images of the Martian surface. The accompanying orbiters provided more than 50,000 images, mapping 97 percent of the planet.”

The data is continually analyzed, and the thermal protection system and parachute were used on other Mars lander missions such as the Mars Pathfinder and the Mars Exploration Rovers, Spirit and Opportunity. 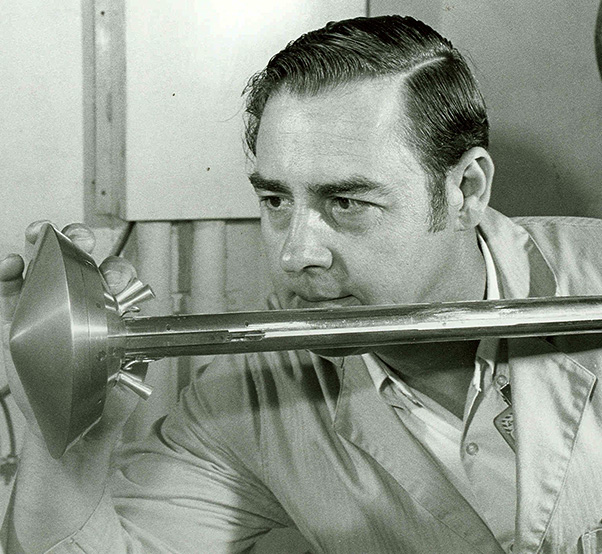 The NASA Viking Mars Probe is set up here in 1971 for a free flight test at the AEDC von Kármán Gas Dynamics Facility by drilling a hole through the diameter of the two-inch models and suspending them on a wire. A system of pulleys and weights held the wire taut while the desired conditions were established inside the wind tunnel. Sudden force applied to the ends of the wire caused it to break within the model, leaving the model unsupported for a brief interval. This permitted engineers to examine the airflow, not only around the model, but also in its wake. Airflow is from left to right. Observing the test arrangement is then F.L. Badman, a test engineer.