Using NASA’s Hubble Space Telescope, astronomers have conducted the first search for atmospheres around temperate, Earth-sized planets beyond our solar system and found indications that increase the chances of habitability on two exoplanets.

Specifically, they discovered that the exoplanets TRAPPIST-1b and TRAPPIST-1c, approximately 40 light-years away, are unlikely to have puffy, hydrogen-dominated atmospheres usually found on gaseous worlds.

“The lack of a smothering hydrogen-helium envelope increases the chances for habitability on these planets,” said team member Nikole Lewis of the Space Telescope Science Institute (STScI) in Baltimore, Md. “If they had a significant hydrogen-helium envelope, there is no chance that either one of them could potentially support life because the dense atmosphere would act like a greenhouse.”

Julien de Wit of the Massachusetts Institute of Technology in Cambridge, Mass., led a team of scientists to observe the planets in near-infrared light using Hubble’s Wide Field Camera 3. They used spectroscopy to decode the light and reveal clues to the chemical makeup of an atmosphere. While the content of the atmospheres is unknown and will have to await further observations, the low concentration of hydrogen and helium has scientists excited about the implications.

“These initial Hubble observations are a promising first step in learning more about these nearby worlds, whether they could be rocky like Earth, and whether they could sustain life,” says Geoff Yoder, acting associate administrator for NASA’s Science Mission Directorate in Washington, D.C. “This is an exciting time for NASA and exoplanet research.”

The planets orbit a red dwarf star at least 500 million years old, in the constellation of Aquarius. They were discovered in late 2015 through a series of observations by the TRAnsiting Planets and PlanetesImals Small Telescope (TRAPPIST), a Belgian robotic telescope located at ESA’s (European Space Agency’s) La Silla Observatory in Chile. 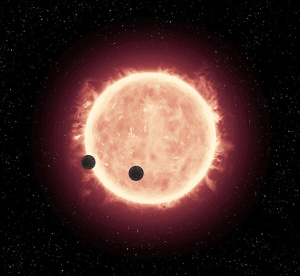 This artist’s illustration shows two Earth-sized planets, TRAPPIST-1b and TRAPPIST-1c, passing in front of their parent red dwarf star, which is much smaller and cooler than our sun. NASA’s Hubble Space Telescope looked for signs of atmospheres around these planets.

TRAPPIST-1b completes a circuit around its red dwarf star in 1.5 days and TRAPPIST-1c in 2.4 days. The planets are between 20 and 100 times closer to their star than the Earth is to the sun. Because their star is so much fainter than our sun, researchers think that at least one of the planets, TRAPPIST-1c, may be within the star’s habitable zone, where moderate temperatures could allow for liquid water to pool.

On May 4, astronomers took advantage of a rare simultaneous transit, when both planets crossed the face of their star within minutes of each other, to measure starlight as it filtered through any existing atmosphere. This double-transit, which occurs only every two years, provided a combined signal that offered simultaneous indicators of the atmospheric characters of the planets.

The researchers hope to use Hubble to conduct follow-up observations to search for thinner atmospheres, composed of elements heavier than hydrogen, like those of Earth and Venus.

“With more data, we could perhaps detect methane or see water features in the atmospheres, which would give us estimates of the depth of the atmospheres,” said Hannah Wakeford, the paper’s second author, at NASA’s Goddard Space Flight Center in Greenbelt, Maryland.

Observations from future telescopes, including NASA’s James Webb Space Telescope, will help determine the full composition of these atmospheres and hunt for potential biosignatures, such as carbon dioxide and ozone, in addition to water vapor and methane. Webb also will analyze a planet’s temperature and surface pressure — key factors in assessing its habitability.

“These Earth-sized planets are the first worlds that astronomers can study in detail with current and planned telescopes to determine whether they are suitable for life,” said de Wit. “Hubble has the facility to play the central atmospheric pre-screening role to tell astronomers which of these Earth-sized planets are prime candidates for more detailed study with the Webb telescope.”

The results of the study appear in the July 20 issue of the journal Nature.

The Hubble Space Telescope is a project of international cooperation between NASA and ESA. Goddard manages the telescope and STScI conducts Hubble science operations. STScI is operated for NASA by the Association of Universities for Research in Astronomy in Washington.

For imaged and more information about Hubble, visit http://www.nasa.gov/hubble or http://hubblesite.org/news/2016/27.