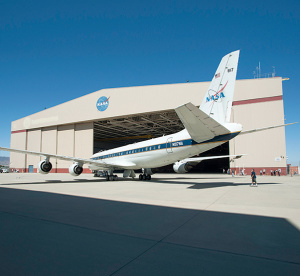 ATom will study pollution in the lower atmosphere and its effects in the creation of greenhouse gases. Greenhouse gases, such as methane and ozone, trap heat and raise global temperatures. Although a moderate amount of ozone prevents excessive solar radiation from reaching Earth’s surface, too much ozone can prevent heat from leaving Earth’s atmosphere. Discovering the origins of greenhouse gases will help scientists better understand climate change.

Although climate simulations attempt to predict the rate of greenhouse gas production, ATom will test those predictions with real-world data, Prather said.

“This mission specifically goes after the core aspect of the models, which is the models’ ability to predict changes in ozone and methane based on human pollution,” he said.

ATom will crisscross the globe over the next four years to gather a diverse selection of data. The mission will focus on remote areas, particularly vast stretches of ocean where unique chemical processes could disproportionately produce greenhouse gases.

By focusing on oceans, ATom will collect a range of data representative of the entire planet, Prather said.

“The parcels of air over the Pacific are a whole range of chemical reactivity,” he said.

The ATom team will release all experimental data to the public. Scientists will then have the opportunity to interpret the data into new findings about Earth’s climate.

ATom’s first operational flight will leave from Palmdale on July 28. Over the next 26 days, the mission will visit the tropics, the North Pole, Antarctica, South America and Greenland.