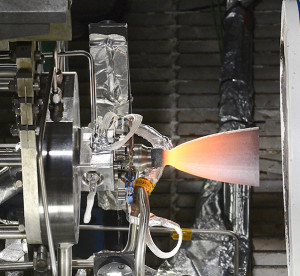 Each RCS engine was tested up to 4,000 pulses and 1,600 seconds — the longest accumulated time ever conducted on a lightweight thruster with a composite chamber. The tests were performed at NASA?s White Sands Test Facility in New Mexico.

Starliner is designed to open a new era of spaceflight, one that will carry humans to the International Space Station once again from American soil. The RCS engines are part of the spacecraft’s service module propulsion system, and are designed to provide on-orbit maneuvering functions, as well as re-boost capabilities for the space station.

Under its Commercial Crew Transportation Capability contract to Boeing, Aerojet Rocketdyne is completing the design, development, qualification, certification and initial production of the service module propulsion system. As part of that contract, Aerojet Rocketdyne will provide shipsets of service module propulsion system production hardware. Each shipset will include Launch Abort Engines, Orbital Maneuvering and Attitude Control engines and RCS engines. Boeing will assemble hardware kits into the service module section of the Starliner spacecraft at its Commercial Crew and Cargo Processing Facility at NASA’s Kennedy Space Center in Florida. Aerojet Rocketdyne also provides propulsion hardware supporting the Starliner crew module and Atlas V launch vehicle. The Starliner is targeting the delivery of astronauts to the space station for NASA beginning in 2018.

The Starliner service module propulsion system provides launch abort capability on the pad and during ascent, along with all propulsion needs during a nominal flight — from launch vehicle separation, docking and undocking from the space station, and through separation of the crew and service modules when the spacecraft begins to re-enter the Earth’s atmosphere. During re-entry, the crew module propulsion is then provided by monopropellant thrusters built by Aerojet Rocketdyne.