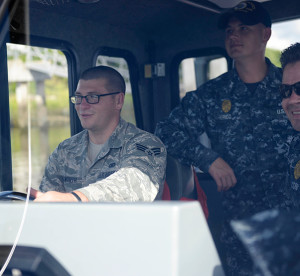 A few miles from the bustling runways full of cargo planes at Joint Base Charleston, one airman is acquiring his sea legs.

SrA. Austin Walworth, assigned to the 628th Security Forces Squadron, recently earned the Navy’s small craft insignia. The “coxswain pin,” as it is commonly called, originated in the U.S. Navy during the Vietnam War. The pin recognizes elite Sailors who are specially trained to operate small boats in combat.

“Weapons is a big part of the course,” said Navy Master-at-Arms 1st Class Brian Cobb, a harbor security training supervisor and lead instructor of the Level II course, “but mostly we discuss high-value asset security and how we maneuver the boats to prevent attacks, as well as conducting insertion/extraction and search and rescue.”

After building on the fundamentals in the classroom, students put what they learn into action through live combat scenarios in the water.

“At the end, we got to actually execute the mission we planned,” Walworth said. “Seeing everything come full circle and putting all of our training together to get the job done was pretty rewarding.”

Because the Air Force and Navy have historically different missions and roles in protecting the U.S., there are some challenges when training between branches. Walworth said this aspect of the qualification process was the most difficult, but it gave him a newfound appreciation for what the Navy does.

“In the Air Force we are used to operating on land, and this type of navigation in the water is completely different,” Walworth said. “All I know is air base defense, but once I got onto the boats here, I wanted to be the best I could be at it.”

The story of Walworth’s climb up the ladder from airman, to small boat crewmember, to coxswain is beneficial for both branches of service.

“This opens a new avenue for security forces airmen to see how the Navy does waterborne security,” Gatewood said. “After completing the course and earning their pin, it allows multiple services to speak one language on the water to help minimize miscommunications. It also helps planning because the Airmen have a better grasp on factors to be considered when performing a maritime security mission.”

Walworth’s achievement also shines as an example to other service members assigned to JB Charleston.

“He sets the new standard for all the Airmen following in his footsteps,” Cobb said. “After earning his pin, he is considered a subject matter expert on everything related to small boats.”

Walworth said he welcomes the expectations that come with breaking down barriers.

“In today’s world, anything can happen and we have to be ready to react to any threat out there,” he said. “I look forward to seeing and being a mentor to new Airmen coming into the program, and I hope they catch as much of an interest as I did.”