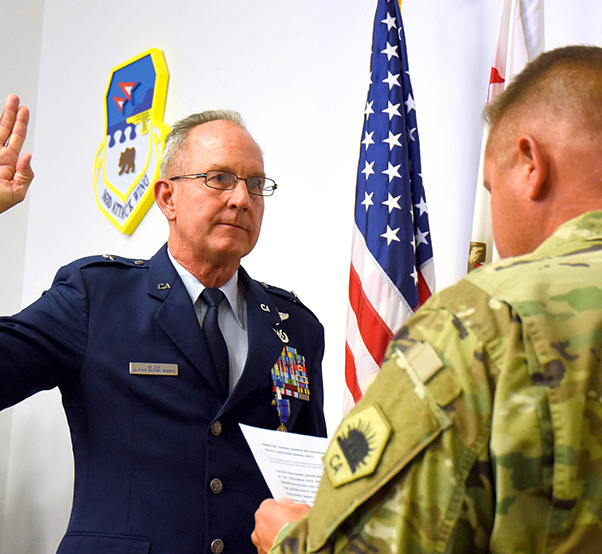 Dr. David Smith, 412th Test Wing Installation Support director at Edwards Air Force Base, Calif., renews his oath of commissioned officers during a ceremony at March Air Reserve Base in Moreno Valley, Calif., Aug. 6, 2016. Smith was officially promoted to the rank of brigadier general Aug. 1.  Administering the oath is Army Brig. Gen. Frank Emanuel, California State Military Reserve commander. Smith was recently selected as deputy commander of the CSMR after serving as the commander of the CSMR’s air component. The CSMR is comprised of the California Air and Army National Guards. Its mission is to provide an adequately trained and organized state military reserve force under the exclusive control of the governor. The CSMR is meant to be capable of accomplishing state emergency responsibilities normally assigned to the National Guard when the guard is federalized or otherwise not available to the governor. Typically, those military duties include assisting civil authorities during domestic emergencies and assisting in the mobilization and demobilization process of the National Guard. It is a volunteer operational force upon which the California National Guard depends. Its members are subject to call to state active duty by the governor. At Edwards, Smith oversees several base support offices for the 412th TW as a civil servant.