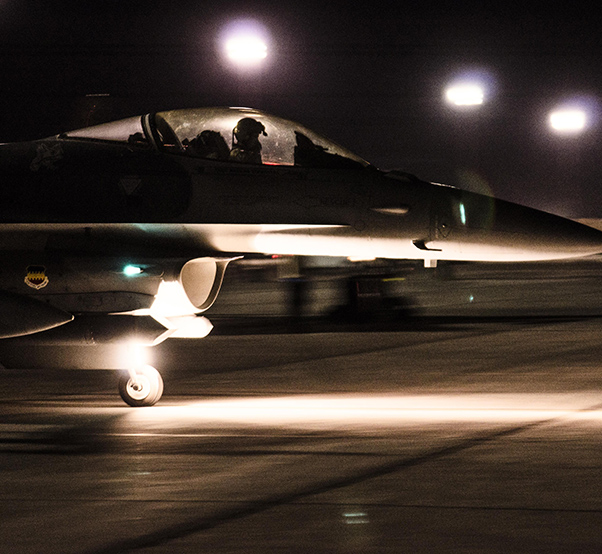 An F-16CM Fighting Flacon from the 55th Fighter Squadron, Shaw Air Force Base, taxis in preparation for a night sortie at Nellis AFB, Nev., Aug. 17, 2016. Red Flag 16-4 conducted night missions for pilots to experience training in a low-visibility environment.

It takes numerous pieces of all shapes and sizes to complete the puzzle of an Air Tasking Order during Red Flag at Nellis Air Force Base, Nev.

One such piece to the puzzle would be suppression of enemy air defenses which has been around since the days of the Wild Weasels.

“The suppression of enemy air defenses means eliminating, avoiding, and destroying threats that are trying to shoot down any of our friendly forces,” said Maj. William Lutmer, 55th Fighter Squadron director of operations, Shaw AFB, S.C. “SEAD has a full spectrum of suppression techniques such as jamming, putting a bomb on the target, or it might even mean using a High-Speed Anti-Radiation Missile to hit it.”

The F-16CM Fighting Falcon, a modified model designated as a block 50, specializes in the suppression of enemy air defenses by having an avionics ability to detect threats. Without the block 50’s unique role friendly forces would be more at risk from the surface-to-air missile systems.

Lutmer, who flown both block 50 and 40 units said, “The difference between the 50 and 40 blocks is the block 40 does air-to-air interdiction and drops bombs on ground targets.”

For some pilots conducting the SEAD missions it can be challenging due to the amount of multitasking involved in a dramatically changing air space. 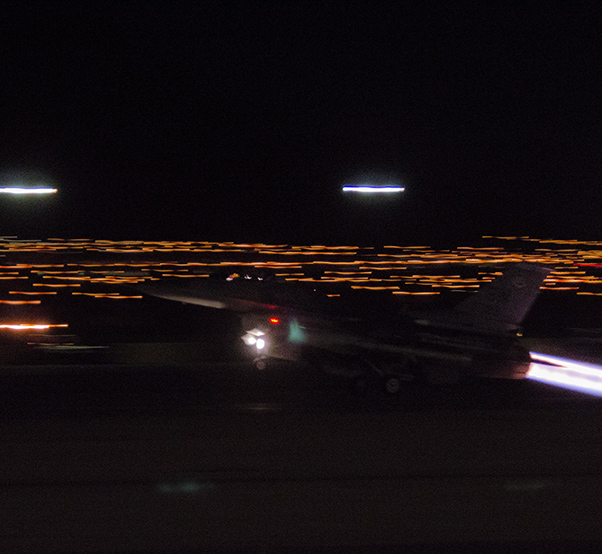 An F-16CM Fighting Flacon from the 55th Fighter Squadron, Shaw Air Force Base, begins to take off while conducting a night sortie during exercise Red Flag 16-4 at Nellis AFB, Nev., Aug. 17, 2016. The 55th FS played a key role during the exercise by providing suppression of enemy air defenses.

“Most of the Red Flag mission scenarios which happened for us were protecting the strikers who were going in to bomb air tasking order targets,” said Lutmer. “Our job was to kill and suppress or hopefully get targeted instead of the strikers so they could hit the target and get back unharmed.”

Like in any puzzle, all necessary pieces are equally important to the bigger picture. SEAD works with other roles such as air-to-air forces and strikers to complete the ATO. Air-to-air forces neutralize the air threats and the F-16CMs taking care of SEAD threats, all so the strikers can get to the target.

“We are generally near the leading edge with the air-to-air fighters, which in this exercise are the F-15C Eagles, pushing out in front of the strikers to do our job to protect them while they drop bombs on their assigned targets,” said Lt. Col. Kevin Crofton, 55th FS commander. “We will be on station when the strikers get there to protect them against the surface-to-air missiles either by letting them know where those systems are or by shooting missiles or dropping bombs on them. We are the last out of the target area to fulfill the weasel motto of ‘First in, last out!’”

Red Flag training is focused on providing a large scale fight in a contested environment where no one can go out on their own but must rely on other units, multiple placements and skill sets to get the job done.

One vital player SEAD forces must rely on are their maintainers, who ensure each aircraft is ready to fly when the ATO is received.

“It’s easy to focus on what happens from takeoff to landing here at Nellis, but without the massive amount of work by our maintainers, we would never leave the ground,” said Crofton. “If our jets and all of their electronic systems aren’t working perfectly, we simply can’t do the mission. In short, the mission could not be done without the 55th Aircraft Maintenance Squadron.” 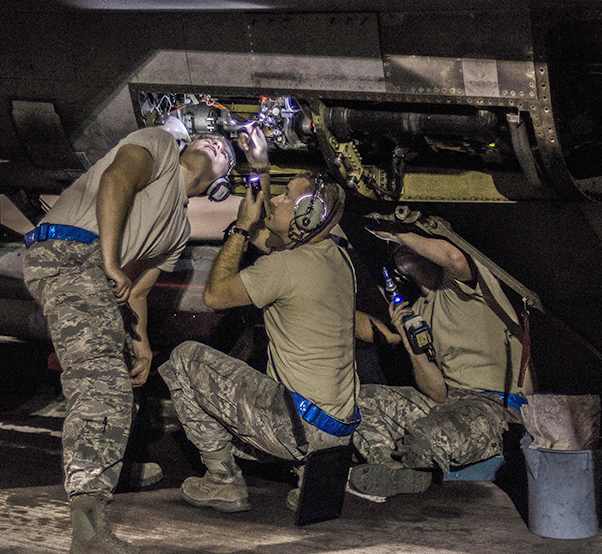 The 55th FS “Shooters” arrived at Red Flag after spending months in preparation for the challenges they would face.

“Red Flag is a capstone event for us,” said Crofton. “The Shooters have been training for it the last four months, going through all the different mission sets the F-16 does. This is our chance to test the tactics we’ve been training for against the best threat array on earth here at the Nevada training range and to combine with our allies to practice war.”

This Red Flag hosted combat air forces from the United States and multiple nations allowing the creation of a realistic environment like one would find in a deployed location. According to Crofton the Nevada Test and Training Range provides coalition partners the perfect location to train together.

“The NTTR is simply the best training airspace in the world” said Crofton. “The threats on the ground and in the air challenge us to a difficulty much greater than we would face in actual combat.”

Editor’s note: This is the first article of a three-part series. The next feature will be about the air-to-air role F-15Cs played in Red Flag 16-4. 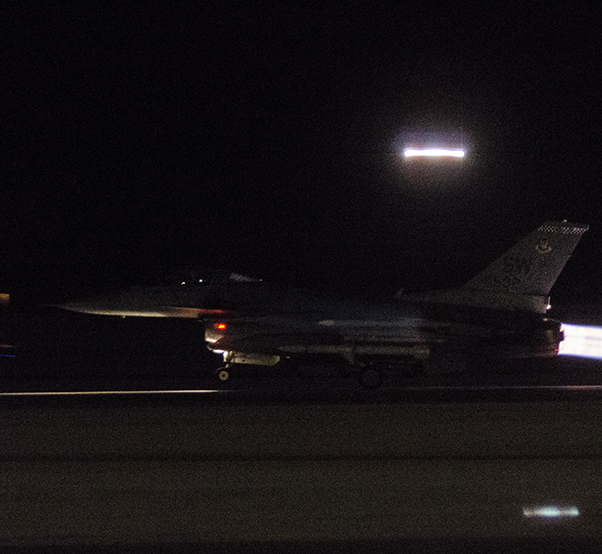 An F-16CM Fighting Flacon from the 55th Fighter Squadron, Shaw Air Force Base, begins to take off while conducting a night sortie during exercise Red Flag 16-4 at Nellis AFB, Nev., Aug. 17, 2016. The 55th FS flew two missions daily, a night and day sortie, in support of Red Flag 16-4 to provide suppression of enemy air defenses. 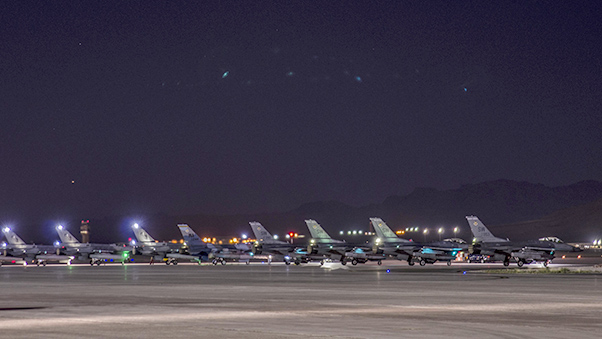 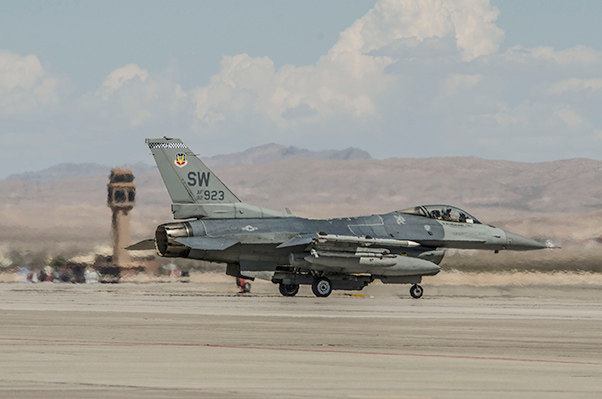