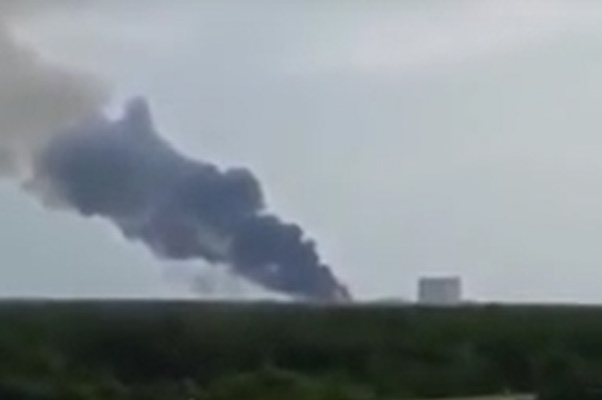 There were no injuries, but the rocket and the satellite onboard were destroyed, SpaceX said in a statement.

The company was conducting a test firing of its unmanned Falcon rocket when the blast occurred shortly after 9 a.m., EDT. The test was in advance of a planned Saturday launch from Cape Canaveral Air Force Station, which is next to NASA’s Kennedy Space Center. It was supposed to hoist an Israeli communications satellite.

SpaceX said that in preparation for the Sept. 1engine firing -a test carried out a few days before every launch — “there was an anomaly on the pad resulting in the loss of the vehicle and its payload.” There were no additional details provided.

It’s the same kind of SpaceX rocket used to launch space station supplies for NASA, and represented a major setback for the space agency’s plans for future cargo hauls and, ultimately, astronaut flights.

Buildings several miles away shook from the blast, and multiple explosions continued for several minutes. Dark smoke filled the overcast sky. A half-hour later, a black cloud hung low across the eastern horizon.

TV cameras showed smoke coming from the launch pad two hours later. The rocket was still standing, although the top third or so was clearly bent over.

The explosion occurred at Launch Complex 40 at the Air Force station, right next door to Kennedy Space Center. NASA said Kennedy emergency staff was on standby. At the same time, personnel were monitoring the air for any toxic fumes. The Air Force stressed there was no threat to public safety in the surrounding communities.

The initial blast sent next-door NASA employees rushing frantically outside to see what happened. At first, it sounded like lightning, but was followed by the sounds of more explosions, then more and more.

SpaceX is one of two companies shipping supplies to the International Space Station for NASA. It’s also working on a crew capsule to ferry station U.S. astronauts; that first flight was supposed to come as early as next year.

Two NASA astronauts were conducting a spacewalk 250 miles up, outside the International Space Station, when the explosion occurred. Mission Control did not notify them of the accident, saying all communication was focused on the spacewalk.

The explosion is a major blow for SpaceX — and also for NASA, which relies on the company to keep the space station equipped with food, science experiments and other supplies.

The California-based company, led by billionaire Elon Musk, had been ramping up with frequent launches to make up for a backlog created by a launch accident in June 2015.

SpaceX was leasing the pad from the Air Force for its Falcon launches. The company is also redoing a former shuttle pad at Kennedy for future manned flights for NASA. AP