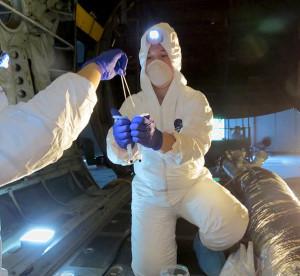 As any aircraft maintainer can attest, corrosion is a major factor affecting the overall health of military aircraft.

Anything from changing temperatures to environmental factors can precipitate corrosion. One major contributor, however, is often overlooked — microbes.

The Air Force Research Laboratory’s biological materials and processing research team is shining a new light on microbiologically influenced corrosion research and how it affects aircraft structures and fuel systems. These researchers look into the causes, effects and prevention of corrosion caused by living organisms.

Over time, mold, mildew, fungi, bacteria and other organic contaminants can build up on aircraft structures as a result of a number of factors including moisture, humidity and human contact. Contaminants not only pose potential health hazards to maintenance crews, but also some can produce acids and enzymes that slowly corrode aircraft surfaces.

“Microorganisms can eat away at surface materials, and some of the worst areas affected are tight, hard-to-reach areas that maintainers have difficulty disinfecting,” said Dr. Wendy Goodson, the AFRL biological materials team lead.

As the military fleet ages, microbial contamination is poised to become an increasingly urgent issue. To address the problem, Goodson helped validate and test the Joint Biological Agent Decontamination System (JBADS), an environmentally controlled enclosure in which an entire aircraft — even areas inaccessible to maintenance crews — can be heated to temperatures of up to 180 degrees Fahrenheit. The process eliminates over 99.9 percent of biological contaminants on aircraft surfaces safely and quickly, without putting aircrews and support personnel at risk of exposure. Also, because the microbes are virtually eliminated, regrowth is greatly inhibited.

JBADS offers numerous other benefits over traditional manual decontamination. It enables the full decontamination of an aircraft in hours as opposed to days, allowing it to be returned to service more quickly. It also reduces manpower, thereby lowering maintenance costs.

A recent successful demonstration of the JBADS concept has generated considerable interest within the user community, and the system is expected to be fully implemented by 2017. But the AFRL team’s efforts don’t stop there. In addition to surface contamination, Goodson’s team is also looking into the effects of biocontaminants in fuel systems.

In an effort to move toward more environmentally friendly energy solutions, the Air Force increasingly relies on biofuels, which come with their own challenges. Since biofuels are processed from organic materials, such as vegetable oils and animal fats, microbes live and thrive in them. These microbial contaminants can create unwanted consequences, such as fuel fouling, fuel degradation and material degradation.

Goodson’s team studies the impact of microbial contamination on biofuels, including how quickly and under what environmental conditions contamination occurs, how susceptible biofuels are to contamination, and the effect of biofilm buildup on aircraft and ground fuel systems. The team is currently studying potential effects of biofuel contamination on tanker aircraft, establishing baseline microbial readings and pinpointing areas that harbor microbiology. 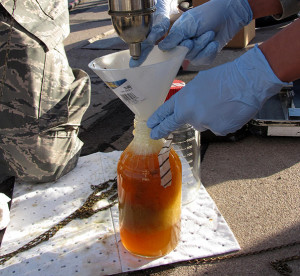 A matter of particular interest to the team is the impact of bioaccumulation on fuel storage tanks. By conducting coupon tests, the team has discovered that microbes immediately begin affecting steel and other structural materials. Over time, the biofilms cause pitting and corrosion. This information tells the team that contamination of biofuels is a potential threat to tanker and storage structures as well.

“It impossible to remove every trace of microbial matter,” Goodson said. “Power-washing removes visible biomass, but leaves billions of microorganisms that begin re-infecting the next batch of fuel as soon as in it introduced into the tank.”

This is where JBADS comes into play again. The AFRL team is now working to expand JBADS for use on fuel storage tanks. By using JBADS, maintainers will not only clean the tanks but also sanitize them, greatly reducing the rate of re-accumulation of microbes and, therefore, increasing the amount of time between cleaning cycles.

The Air Force spends approximately $6 billion annually on corrosion issues, of which up to $1.2 billion is potentially spent on microbiologically influenced corrosion. Add to that the costs of biofuel fouling, storage tank and structure cleaning, and other preventative and maintenance costs, and Goodson said the technologies her team is developing could be critical tools for the future of the war fighter.

“These solutions are essential in light the changing face of fuels and fuel systems. They could be real game changers for military aircraft sustainment,” Goodson said.