Nearly three years into her tenure as the Air Force’s top leader, Air Force Secretary Deborah Lee James reaffirmed that people continue to be her top priority during her State of the Air Force address at the Air Force Association Air, Space and Cyber Conference Sept. 19, in National Harbor, Md.

James also addressed key issues such as reversing downsizing efforts, modernization of aircraft and space domain efforts, and how a long-term continuing resolution would be detrimental to the Air Force.

Reflecting on her time as the Air Force’s leader, James said, “There have been no issues more important to me over the last 2 ½ years than people issues.”

Taking office in December 2013, the wars in Afghanistan and Iraq were dwindling, and personnel reductions continued, which “on paper,” James said made sense.

However, James said that as she traveled the world interacting with Airmen, it seemed that reductions were not the answer. Personnel shortages were putting a strain on Airmen. Global security issues began emerging, and Airmen were needed. Russia illegally invaded and annexed Crimea, the Islamic State of Iraq and the Levant continued to terrorize Syria and Iraq, more airpower was needed in the Pacific, and a presence was needed to protect the freedom of navigation in the South China Sea.

With the support of the president, Capitol Hill and defense leaders, by the end of the year the Air Force’s active-duty end strength is expected to reach 317,000.

Aside from increasing the active-duty strength, James said she is committed to preventing sexual assault, which continues to be a top priority. She also said areas of victim care and investigative assets will continue to be “ramped up.”

Modernization of aircraft, space
James said replacing and modernizing a fleet with an average aircraft age of 27 years old, is an absolute necessity to remain dominant in the airpower arena. 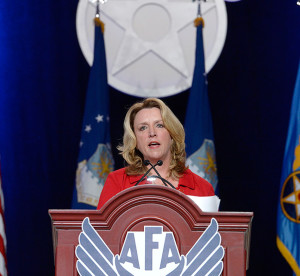 Air Force Secretary Deborah Lee James gives her “State of the Force” address during the Air Force Association’s Air, Space and Cyber Conference in National Harbor, Md., Sept. 19, 2016. A highlight of James’ presentation was announcing the official name of the Air Force’s newest bomber, the B-21 Raider.

“Balancing this fleet with the current demand, reduced capacity of aircraft and personnel, and technological advances among our adversaries — you add all that up and it makes maintaining Air Force full-spectrum readiness very challenging,” James said.

However, perhaps even more important is to improve operability and advancements in space. During the past few years, billions of dollars have been invested into the space enterprise.

“Space is now contested and congested,” James said. “It’s extremely important to everything that we do in the military, including precision guidance; navigation; missile warning; weather; intelligence, surveillance and reconnaissance; and communications.”

“Most importantly, we are changing the culture in our space enterprise,” James said. “We need to get our heads around for the future — what happens if a conflict on Earth extends to space? How will we defend our assets?”

James said this will affect how Airmen train, and will include building a space mission force ready for conflict that extends into the space domain. It will also mean the Air Force will operate differently, and the standing up of the Joint Interagency Space Operations Center at Schriever Air Force Base in Colorado Springs, Colo., is proof of that.

Long-term continuing resolution would be detrimental
James said a short-term CR is all but certain and being able to manage in that state for three months or less is tolerable, however, anything longer would be harmful.

It would also limit training and readiness for all Airmen and have an impact on Guard and Reserve drill weekends as well as flying hours, according to James.

The ability to keep up with the air strikes on ISIL would also be at risk, as a long-term CR would reduce the ability to resupply stocks of precision munitions.

Some other areas a long-term CR would affect include capping the production of the KC-46A Pegasus, prevent progression of the B-21 Raider development, and delays to the construction of about 50 major construction projects, some of which would affect the F-35A Lightning II support facilities.