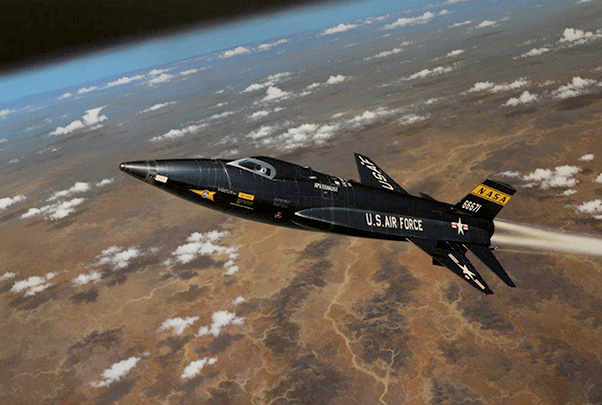 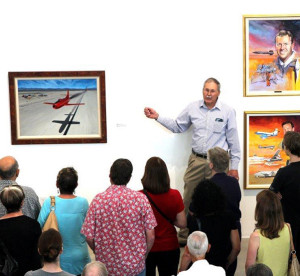 The show is a part of MOAH’s “Made in America” exhibition and was on display Aug. 13-Oct. 2.

The exhibition titled “Probing the Sky” features flight research paintings and sculptures from NASA’s Fine Art collection and comes from the recent book written by Curtis Peebles. The book details the work done by the National Advisory Committee for Aeronautics (the precursor to NASA) with the first round of experimental airplanes that began flight in 1946 at Muroc Army Air Field.

Guests also received a copy of “Probing the Sky,” “Research Technology & Engineering Report 2015” and “NACA/NASA — Celebrating a Century of Innovation, Exploration, and Discovery in Flight and Space 1915-2015.” Many former Flight Research Center employees attended the talk including former Center Director Kevin Petersen, who supported the center’s aviation art projects while much of this art was being created.

Martin’s tour detailed the contributions of the research aircraft that first came to the High Desert; starting with the world speed record-setting Douglas D-558-1 Skystreak, and the well known Bell X-1 series flown by both the Air Force and the NACA.

The experiences of Round One experimental airplanes, and particularly the High-Speed Flight Station pilots, ground crews and researchers, became the basis for planning and carrying out the Mercury flights of astronauts like Alan Shepard, Gus Grissom and John Glenn.

“Historically accurate works of art provide a unique opportunity to understand the region’s history,” Martin told a large crowd of viewers. “A lot of the history we think we know comes from movies, but movies are made for entertainment and to make money, they are not always a good depiction of history.”

Douglas Castleman’s painting “Last Flight of Endeavour,” is one of many beautiful paintings that were displayed at MOAH on Lancaster Boulevard.

Speaking about the movie “The Right Stuff,” Martin read a quote from the first astronaut to walk on the moon Neil Armstrong. “I did see the movie, I thought it was very good film making, but I thought it was terrible history. It had the wrong people working on the wrong projects at the wrong time. It bears no resemblance whatever to what actually was going on.”

Early in the Mercury program, the agency realized that cameras alone were not enough to document their work so they reached out to the nation’s best known artists to tell the human story of space exploration through their eyes. NASA’s fine art program began in 1962.

Using artists and sculptors of different mediums such as acrylic, colored pencil, oil, watercolor and other genres serves the purpose of educating different audiences about the legacy work of the NACA as well as the recent work of NASA. The artists are free to be creative, yet they capture a part of true history.

Many of the portraits contain small renderings of the early “Round One” research aircraft such as the X-1, X-3, X-4, X-5, the Skystreak and the Skyrocket. “These aircraft were challenging to pilot, but in the end, they pioneered the very features that became standard on the successful production jet aircraft that followed, such as the F-104,” explained Martin. 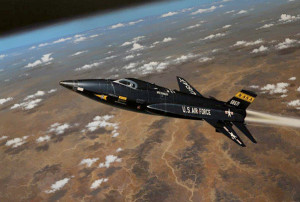 Neil Armstrong once had similar thoughts himself. He said, “By the time I was old enough and became a pilot, things had changed. The great airplanes I had revered as a boy were disappearing. The record setting flights — across the oceans, over the poles, and to the corners of the Earth — had been accomplished and I resented that. All in all, for someone who was immersed in, fascinated by and dedicated to flight, I was disappointed by the wrinkle in history that had brought me along one generation late. I had missed all the great times and adventures in flight.”

Martin’s tour wrapped up with Robert McCall’s portrait of NACA test pilot and NASA astronaut Neil Armstrong, entitled “The Real Right Stuff.”  It was the last painting of McCall’s long and distinguished career. Milt Thompson, who is part of the Aerospace Walk of Honor, came to work at Edwards as the first round of experimental aircraft came to a close. He thought to himself, “The X programs are all over, I’ve missed it all.” However, Thompson went on to fly the X-15.

Looking back through the art in the gallery, “If we think we have gotten here a generation too late, if we think we’ve missed it all, well, we’re probably wrong about that, too,” concluded Martin as he ended the tour.