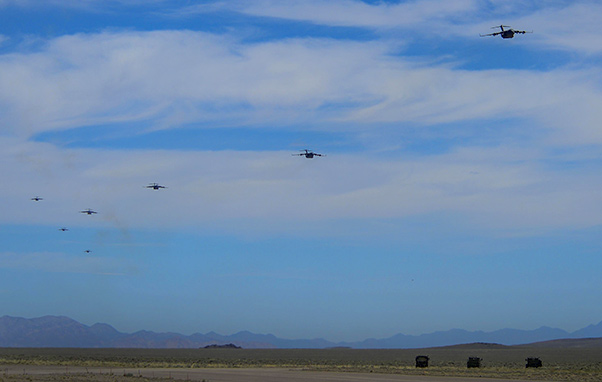 C-17 Globemaster IIIs, fly in formation over the Nevada Test and Training Range during the Joint Forcible Entry Exercise portion of the United States Air Force Weapons School Advanced Integration, at Nellis Air Force Base, Nev., June 16, 2016. The exercise is the U.S. Air Force Weapons School biannual collaboration that, according to an Air Force fact sheet, exercises the Air Force’s ability to tactically deliver and recover combat forces via air drops and combat landings in a contested environment.

Spanning Southern Nevada lies the crown jewel for tactics, training and operational testing for the Department of Defense: the Nevada Test and Training Range.

“The NTTR provides the warfighter a flexible, realistic and multidimensional battle-space to conduct testing, tactics development, and advanced training in support of U.S. national interests,” said Col. David Avila, Nevada Test and Training Range commander. “Supporting approximately 40,000 sorties each year, the range occupies 2.9 million acres of land, 5,000 square miles of airspace which is restricted from civilian over-flight and another 7,000 square miles of military operations area, or MOA, which is shared with civilian aircraft.”

Centered around all of the NTTR’s unique assets, the DOD uses this vast landscape to host a variety of its largest joint exercises.

With all the capabilities on the massive land range of Nevada, the 8 million square mile Space Test and Training Range, located at Schriever Air Force Base, Colo., has proven to be just as crucial in the development of tactics and training to the modern warfighter.

“The NTTR is an asset of the United States of America, all Department of Defense agencies, national security agencies including other governmental agencies and our allied partners,” said VanHerck. “We routinely bring partners to the NTTR to train just as if we were going to go into combat with them, and that is a crucial capability for us.  All this success comes at a price as our ability to meet warfighter requirements has exceeded our capacity.  We continue to look for innovative ways to address these issues, but the reality is it will likely get worse before it gets better as 5th generation aircraft stretch the capabilities of our range.”

“I’m very proud to be a part of the NTTR and STTR,” said Avila. “There is a lot more to the range than just the range. Behind every square mile are the many people who accomplish the mission; from scheduling to logistics to target and emitter lifecycle management–we have a team who are passionate about what they do and are constantly finding ways to make it better through innovative thinking.  This is the epicenter of the most advanced training in the world and we are all proud to be part of such a storied history.”