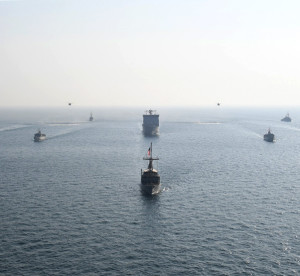 The bilateral exercise encompassed the full spectrum of mine countermeasures from mine detection and identification to mine clearance in order to assure operational readiness of U.S. and U.K. MCM forces. Encompassing surface and subsurface MCM operations, the exercise demonstrates the cooperative skill and will of the U.S. Navy and Royal navy to work together in ensuring security and freedom of navigation throughout the Arabian Gulf and adjoining seas.

“Mine countermeasure capabilities are critical to providing unfettered access to strategic and economically important waterways, for both naval vessels and commercial shipping,” said Capt. Eric Wirstrom, commander of CTF 52. “We are exercising well-develop mutual capabilities which address threats to freedom of navigation and international commerce.”

Each past year, U.S. and U.K. MCM forces executed a series of MCM exercises in the Arabian Gulf as part of a cooperative strategy to develop mutual capabilities in addressing threats to international commerce. With three of seven critical maritime chokepoints located in the region and forty percent of the energy vital to the global economy passing through these chokepoints every day, closure of any strategic waterway will have worldwide economic and national security consequences.

“U.K.-U.S. MCM Exercise 17-1 is one of several annual bilateral MCM exercises which allow the coalition forces stationed in The Gulf to hone our skills and be able to respond to any mine threats,” said Royal navy Cmdr. David Morgan, commander, RFA Lyme Bay and head of the coalition task group for the exercise. “By continually training together the MCM component of the Combined Maritime Forces can help to safeguard the free flow of commerce in and out of The Gulf.”

Due to the global implications of any mining of sea lanes, the conduct of U.K.-U.S. MCM Exercise 17, wholly defensive in nature, had stabilizing effects in ensuring freedom of navigation that reach well beyond these waters.