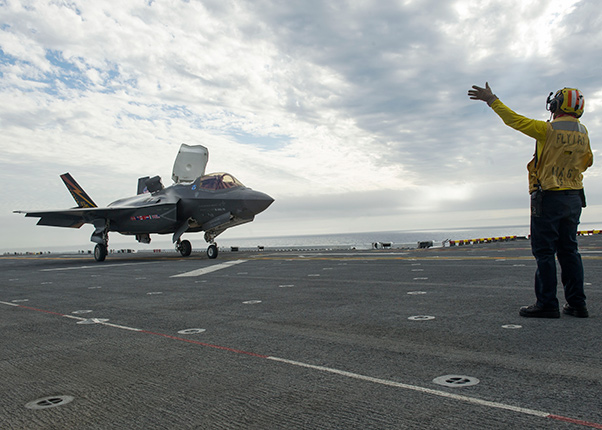 An F-35B Lightning II aircraft launches for the first time off the flight deck of the amphibious assault ship USS America (LHA 6). The F-35B short takeoff/vertical landing (STOVL) variant is the world’s first supersonic STOVL stealth aircraft. America, with Marine Operational Test and Evaluation Squadron 1 (VMX-1) and Air Test and Evaluation Squadron 23 (VX-23) embarked, is underway conducting the first phase of developmental testing for the F-35B Lightning II aircraft, which will evaluate the full spectrum of joint strike fighter measures of suitability and effectiveness in an at-sea environment.

Prior to beginning flight operations with the F-35B, a group of flight deck aircraft directors and a crash and salvage team assigned to America’s Air Department spent three days at Marine Corps Air Station Yuma, Arizona with VMFA 22 for familiarization training on the aircraft.

Although the F-35B has been tested in many places and on different Navy platforms, training involving handling of the fifth generation Lightning II is not yet fleet-wide. The amphibious Navy’s only exposure to the aircraft came in 2012 and 2013 aboard USS Wasp (LHD 1).

“It was the first time we were able to have eyes on launch, recovery, and taxiing the aircraft,” said Chief Petty Officer Phillip Posada, V-1 Division’s crash and salvage leading chief petty officer. “We were able to get familiarized with the aircraft’s tie down points, as well as ordnance and cockpit familiarization to ensure that we are able to take care of it safely and without causing unnecessary damage to the aircraft.”

As the world’s first supersonic short takeoff and vertical landing (STOVL) stealth aircraft, directing the Lightning II has subtle differences from other aircraft the crew is accustomed to handling. 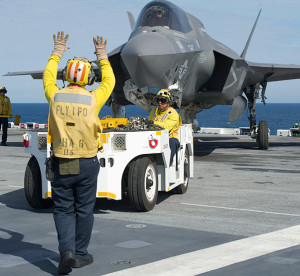 “There is a slight difference in handling the AV-8B [Harrier] and the F-35B,” said Posada. “The Lightning II packs more of a punch when it takes off. Because of that, our handlers know to plant themselves firmly and grab a pad eye if necessary to steady themselves. Another attribute is that it has a sharper turning radius, so we are able to taxi the aircraft easier.”

The crash and salvage team also learned how to implement their firefighting expertise with regard to approaching the aircraft and shutdown procedures.

After completing the familiarization training, America embarked eight Sailors from USS Essex (LHD 2) to pass on their knowledge and provide them an opportunity to work with the F-35B for the first time.

“Because we were able to have the familiarization in Yuma, we were prepared to the point at which working with the aircraft was already second nature to us,” Posada said. “All of our professionals are able to launch, recover, taxi, and work around the Lightning II, and we want to pass our knowledge on to the rest of the fleet to incorporate the F-35 skill set for future operations.”

The America crew seems thrilled to support DT-III, and will continue to approach supporting the program in a safe and professional manner throughout the current test phase and upcoming Marine Corps demonstration.

“We are all excited to be working with the F-35B,” said Lt. Raymond Maturino, America’s handling officer. “We are using the same mentality as we would use for any other aircraft when it comes to safety, procedures, leadership, supervision, and redundancy of position. We are also consistently training to ensure that we evolve to meet expectations as the test teams solidify what the capability and requirements for this aircraft will be for us.” 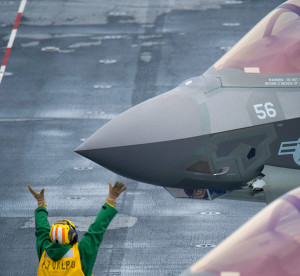 An F-35B Lightning II aircraft is taxied on the flight deck of the amphibious assault ship USS America (LHA 6).

Maturino is proud of America’s aviation team and everyone who has helped make F-35B operations a success on the fleet’s most aviation-centric amphibious assault ship.

“I could say how awesome my team is, but really all you have to do is look out the window,” Maturino said. “Words can’t describe how proud I am of what they do every day. I’m very proud and think very highly of this team, and I’m not just talking about the team moving aircraft. I’m talking about every facet that makes this possible.”

America began flight operations with the F-35B Lightning II for the first time Oct. 28, and will continue testing until the end of November.

The America class of amphibious assault ship design enables it to carry a larger and more diverse complement of aircraft, including the tilt-rotor MV-22 Osprey, the new F-35B Lightning II, and a mix of cargo and assault helicopters. America is able to support a wide spectrum of military operations and missions, including putting Marines ashore for combat operations, launching air strikes, keeping sea lanes free and open for the movement of global commerce, and delivering humanitarian aid following a natural disaster.