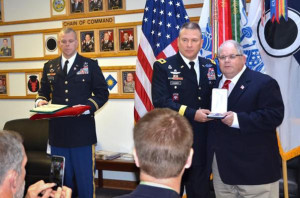 Nearly 100 years after Pfc. John Barnard Goodman was drafted into the Army Signal Corps during World War I, 20 of his descendants met with military leaders at Joint Base Lewis-McChord’s I Corps Headquarters Saturday for a ceremony to honor him with a Silver Star and Purple Heart for his exemplary service and extraordinary valor.

The Silver Star is the United States military’s third-highest decoration for valor in combat, and it is rarely awarded — only for extreme gallantry in action, according to Maj. Gen. Mark R. Stammer, I Corps deputy commanding general.

“[The Silver Star] is very rare in all wars and generally goes to those who have altered the action they have seen themselves in to protect [their fellow service members] — it has to mean something,” Stammer said.

The medals were accepted on behalf of the family by John’s grandson, Mark Goodman, of Renton. The younger Goodman found out about his grandfather’s heroic actions and proposed honors through research and archived records at Joint Base Lewis-McChord’s Lewis Army Museum.

His grandfather’s name was listed in a publication of World War I General Orders for the Silver Star. Mark inquired about the possibility of receiving his grandfather’s awards through the Army at I Corps, which forwarded the information for review and subsequently made the presentation.

“Today, we’re going to right a lot of [the lateness of the presentation] and make it right for the family,” Stammer said. “And make it correct for your grandchildren who can look at the pictures and research in future years.”

Mark became interested in military history at age 10 when his parents gave him a collection of G.I. Joe figures and vehicles. His dad, William Goodman, a Korean War Navy veteran, told Mark and his three siblings stories of his own military days and tales of grandpa Goodman, who served in the 37th Service Company, 2nd Field Signal Battalion, 1st Division.

According to Mark’s records, which he began compiling as a youth and has continued compiling through the past four decades, the French government cited his grandfather’s battalion three times, with two palms and one gold star. On Oct. 9, 1918, his grandfather’s battalion was gassed in the Argonne Forest, for which he received the Purple Heart and the World War I Victory Button. He was also classified as missing in action for six months, according to his Mark’s research.

On June 18, 1919, John was honorably discharged from the military. He married Marie Agnus Preeshl in 1921. The couple had four children, John Jr., Barbara, Elizabeth and William. He served as postmaster in Gildford, Mont., from 1919 to 1935. During World War II, John assisted the war effort by working construction in Alaska. His wife worked as an aircraft mechanic at Malmstrom Air Force Base, Mont., during the war.

During the reception following the ceremony Saturday, another one of John’s grandsons, Bruce Manix, of Chimacum, Washington, told tales from his recollections of Grandpa Goodman. When Manix was a small child, his grandfather made wooden gun toys for him and his siblings and cousins. At 6 years old, Manix wanted a tommy gun — a Thompson submachine gun, made popular by actor Vic Morrow in the television show, “Combat.”

Manix recalled his grandfather asking him what the gun looked like and then creating a wooden version for him. Later, when the child broke that gun, his grandpa, not too happily, made him another.

“I could go on forever about grandpa,” Manix said, near tears and his voice breaking.

Mariah Hanna, a second-year biology major at Pierce College in Lakewood, is the great-granddaughter of Goodman. She attended the ceremony at Joint Base Lewis-McChord with her mom, Georgia Hanna.

“My mom does a lot of genealogy, so I heard a lot about my great-grandfather when I was growing up,” Mariah said. “Hearing about great-grandpa getting sprayed with mustard gas during World War I always stuck in my mind. I think it’s really cool our family has this much history, and my great-grandpa did so much for our country.”